So yeah, this is quite a bit different from the first Sleepaway film. Instead of Felissa Rose, we got Bruce’s sister, Pam, in the role of Angela. We got a camp full of kids named after Brat Pack actors. We got mullets galore, dudes with short shorts, boob shot after boob shot, marijuana, and more. The production is bad, the acting is badder and I wouldn’t have it any other fucking way. The terribleness is what makes Sleepaway Camp II so goddamned epic, almost as enjoyable as its predecessor.

Seriously, if someone were to ask me if Sleepaway Camp II is any good, I would just spit out “Oh, I’m a happy camper, I love to drink and fuck! And if you pay me money, on my titties you can suck!” And if that didn’t answer their question, I would punch them in the fucking face. Not really, but I would be disappointed if that rhyme wasn’t a selling point. 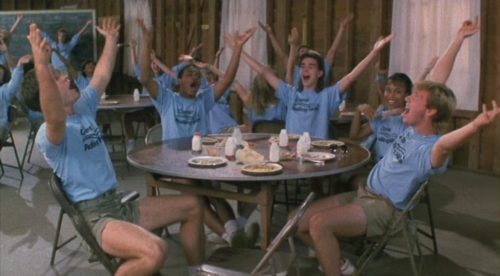 The murderous events from the first film are used as a campfire story in the beginning of part II, a ruse to make kids shit their skivvies. Very much like campfire scenes in many a Friday the 13th film, or any other camp film. There isn’t a whole lot of story to Unhappy Campers. Generally, if you fuck up mildly, Angela will give you another chance; if you fuck up again, Angela is gonna fuck you up. Shit, that’s all the story I need. Only thing I could really ask for is a scene of two people spinning around all giggly while flirting… SHIT! We get that, too!

Tons of nifty POV shots and some low cam work on Angela’s legs, lurking through the woods looking for naughty kids doing shit they aint supposed to be doing. There’s a couple of genuinely creepy moments toward the finale, such as an overhead view of the empty girls cabin, accompanied by Angela rockin’ Kumbaya on her acoustic. The ending chase scene is epic, going back and forth from POV to side view shots of Angela pursuing our final girl. Dig it. But what takes the cake is a montage that showcases all the deaths in blue screen tint, with Angela’s “Happy Camper” song slowed down to the tone of a low, guttural demon fart. It’s fucking epic. 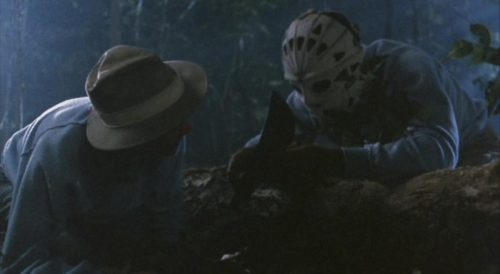 Do I really need to talk about acting? Is anybody out there really concerned with solid performances in a Sleepaway Camp movie? For what it’s worth, Pam Springsteen makes Angela all her own. She can go from a “Happy Camper” jam session to fucking someone’s day up in the blink of an eye! It’s almost a whole different character, but whatevs, works for me. As far as everyone else; Brian Patrick Clark plays camp counselor TC, and his hair steals the fucking show every time he’s/it’s on screen. Valerie Hartman’s bod makes all the right moves, Renee Estevez as Molly pulls off the cute innocent “emo before people knew what the fuck emo was” shit with ease, Tony Higgins has the heartthrob element on point as Sean, and the late Walter Gotell changes his accent every five minutes as Uncle John. Oh, and damn, we can’t forget Carol Chambers and Amy Fields as Brooke and Jodi, the Shit sisters. They’re basically stoned and drunk the whole time, which is why I love ’em!

In a slasher sequel, I expect the gore factor to be amped the fuck up. Bill Johnson (The Walking Dead, Eight Legged Freaks) has some cool stuff going on here, but it’s sadly kinda tame, overall. I wanted brains, blood and bodily fluids slapping me in the goddamn face. Just didn’t turn out that way. There are some bad ass moments, like a log to the side of the head, a death by being shoved in a shitter and a straight fucking awesome decap scene, but I wanted more. When Angela is going to kill someone with a battery drill, I need to see that shit, not just a bit of blood splatting all about. Oh well.

As far as the soundtrack goes, they had me at the opening scene with Anvil. If I had hair I would be swinging that shit full throttle through most of this movie.

Ultimately, Sleepaway Camp II: Unhappy Campers is a big WIN as a sequel. I applaud director Michael A. Simpson and writer Fritz Gordon for not attempting a rehash. Let’s face it, you can’t top the ending of the original, and this is well realized here. A campy horror film at a camp… works for me.