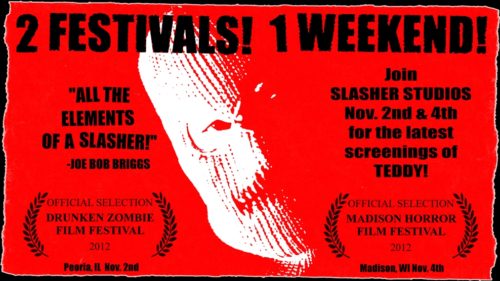 On this week’s episode of Slasher Studios, our hosts Kevin Sommerfield and Steve Goltz will be discussing their weekend of film festivals with screenings of Teddy at Drunken Zombie Horror Film Festival as well as Madison Horror Film Festival. Also includes reviews of horror shorts such as The Keeper, Dummy, Til Death Do Us Part, Predator/Prey, Writer’s Block, and much more! Show starts tonight (November 5th) at 10PM central. Click on the link below to listen to the show live or to check out an archive of a past show.