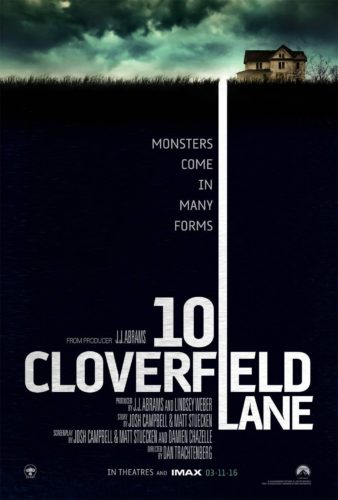 A young woman wakes up in a fallout shelter following an accident where a man explains to her that everything and everyone above ground is dead due to an attack. Tensions mount as she and another bunk mate assess their situation as they try to discover what really happened up above and whether their “savior” can actually be trusted.

This latest thriller is the latest entry into J.J. Abrams’ Cloverfield anthology. Yes, at this point, it is safe to say that there may not be a REAL Cloverfield sequel. It very well takes place in the same universe, but it doesn’t follow up on the event from the first film. But do not let this disappoint you. I will go as far to say that this is even better than Cloverfield. The tagline for the film nails it when it says “monsters come in many forms”. The monster in question is Howard played by John Goodman. Right from the get-go you get this strong sense of unease around him, but there are also certain moments where you feel like he can be trusted. That is the brilliance of this superbly crafted script and the performances. Throughout the film you are literally sucked into the world and mind-sets of these characters. You feel the tension between everyone, as well as the fear, and sense of unease as the our two captured characters. Even the small moments of humor emit a sense of nervous laughter. It is due to this and the amazing cinematography that you feel just as trapped in this bunker as Michelle and Emmett. The characters also come off as super realistic and are so well-developed you genuinely feel like you know them and you really like them. So as the tension and thrills escalate you fear for them. Scenes such as the initial dinner scene between the three characters and a game of 20 Questions are just a couple of the tension-filled scenes that left me on edge. There are even moments of shock where things just happen out of nowhere that cause you to drop your jaw where you can’t believe that just happened. It all leads to a final act that goes out with a bang.Â

The performance by the very small cast was perfection. Mary Elizabeth Winstead as our leading lady and heroine Michelle, plays the role with so much ease. She’s a genuinely likable character who feels real in her emotions and the problems she faces within herself. In her moments of terror, she plays it out in a way that comes off as real and not over-dramatized. She’s just someone you root for the whole time, comparable to Ripley from the Alien films. Likable, smart, and resourceful. Next we have John Gallagher, Jr as Emmett. He’s more or less the major comic relief of the film but doesn’t get carried away. He’s the one who tries to keep Michelle at ease. Gallagher, Jr. plays out the humor perfectly and has many sincere moments that make him just as likable as Michelle. Finally, and mostly there is John Goodman as Howard. Words cannot describe the performance he gives. It is honestly an Oscar worthy performance. He was so damn intimidating just watching him on-screen, that even even the smallest things or movements he did left you on edge. He could be totally calm one moment but instantly snap and leave you freaked. But it’s even his moments of calm that leave you uneasy. But like our characters, Goodman does a terrific job of leaving you wondering whether or not he can be trusted.Â

Never before have I seen a film like this (or at least in a while) that to me was perfection in every aspect in filmmaking. The script, directing, overall production, acting, etc. was something that I would not have expected. Again, the fact that this is not a direct sequel to Cloverfield should NOT discourage you from seeing this amazing piece of cinema that will leave you breathless and on edge throughout the whole film.