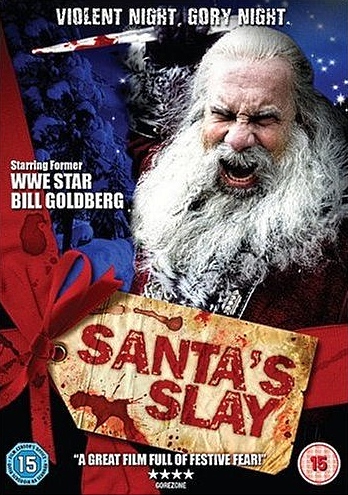 It’s Christmas Eve 2005, the Mason family is enjoying Christmas dinner when a very large and very angry Santa Claus (wrestler Bill Goldberg) comes down the chimney and kills them all. A few of the death highlights include Santa stabbing someones hands to the table with steak knives, a sharp pole that impaled through a young woman’s head, a head set on fire and then drowned in eggnog, and a man pushed into a glass case. Sound like your kind of slasher? What if I said that the actors dying in this opening scene were none other than James Caan, Fran Drescher, Chris Kattan, and Rebecca Gayheart? Let’s just say that by the time Santa grabs a leg from the table and smashes into Drescher head as she pleads, “I’ve been good!”, the movie had officially won be over. The first five minutes of “Santa’s Slay” delivers more genuine laughs than most Hollywood comedies deliver in their entire running times. Does the rest of the movie live up to the potential of this incredible opening? Well, not really but I’m getting ahead of myself.

You see, Santa is ready to ride on his sleigh driven by his “hell-deer” (ho-ho), killing all of those who have been naughty all year round. After dismembering the Mason family, Santa sets his sights on Hell Township to kill the locals in various holiday-themed ways. In one of the film’s sleazier scenes, Santa kills the occupants of a local strip club frequented by Pastor Timmons (Dave Thomas, a better sport than he is actor). Later, in another rather tasteless scene, Santa murders the local Jewish deli owner Mr. Green (Saul Rubinek) using his own menorah.

Meanwhile, we meet teenager Nicholas Yuleson (a rather sweet and, for the ladies and gay men, quite easy-on-the-eyes Douglas Smith) living with his crazy grandfather (a hilarious Robert Culp in one of his last performances), a crackpot inventor who has created a bunker in their basement to survive Christmas. When Nicholas asks Grandpa why he hates Christmas, he is shown “The Book of Klaus”, which reveals the origins of Santa Claus. As it appears, Santa was the result of a virgin birth produced by Satan in much the same vain that Jesus was the product of God. Christmas was “The Day of Slaying” for Santa until, in 1005 AD, an angel defeated Santa in a curling match and sentenced Santa to deliver presents on Christmas for 1000 years. This means that Santa is free to kill again in 2005.

Believe me, “Santa’s Slay” is just as goofy as it sounds and just as fun too. You want a killer Santa murdering the naughty citizens while Robert Culp challenges Santa to one last game of hockey to decide who rules the world? Well, this is the movie for you. It has too much plot by half and not all of the jokes work but damn if this movie doesn’t work it’s ass off to do anything and everything for a laugh. I admire that in a low budget slasher. Even if the rest of the movie doesn’t live up to that terrific opening scene.