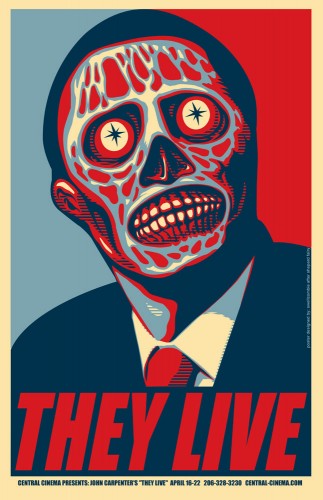 I thought, I’d put this film down cause Halloween is such a tired choice, yes its a great film and yes it holds up well, but I always gravitated more toward this film as one of my favorite films by John Carpenter. Before I continue I would like to point out I’m not a huge fan of John Carpenter, he is a fine director, but aside from a couple of films I’ve like his writing work a bit more. The Thing for instance is overhyped, it has great special effects and the whodoneit element keeps you interested, but its not the best, its watchable.

Now onto my review for They Live…This is a great flick, it can’t be categorized as simply a thriller or even horror(its not really classified as that either)but as an Action/Thriller Sci-Fi film. During the time that I saw this I was a huge fan of Rowdy Roddy Piper and was hyped up to see him “Chew bubblegum and kick ass” you can tell that John Carpenter felt the same way as this film includes one of the longest fight sequences ever, I believe it goes on for more than 5 minutes.

Rowdy Piper stars as a drifter, who ends up in a city as a construction worker, where a group of people outside a church spend their time trying to avoid the local authorities, who seem to be a bit aggressive when it comes to hassling the citizens. Roddy does a terrific job in the role, he plays the role as a silent type, occasionally speaking when the time calls for it, he is very observant, which is what causes him to get in the middle. When your a wrestler you must act a certain way as written for your character, in this film his acting is expanded upon as he is known for being well Rowdy, like a maniac, here he has to fall back on that.

Keith David enters into the film as a nice guy construction worker, who befriends Piper and is also caught up in this mess. Keith David is a terrific actor and one of the few cool aspects of The Thing, here is is equally as terrific, playing the guy who tries to avoid being involved but of course can’t help but be involved when he is forced. The fight scene I mentioned above consist of him and Piper and its one of the best you’ll see, but you wouldn’t believe was started it and what keeps it going. You have to watch to find out and if you really want a good version wait for the Scream Factory release of a special edition later this year.

Meg Foster plays a member of the source of the films main story, she plays it very somber, never letting on what it is she is really up too, you spend the film wondering whether she is a friend or foe. I love the effects in this film, they are very unique as its simply adding makeup and making things black and white, but it feels so much more. The story is incredible, its very simple, a drifter walks into a town where things aren;t what they appeared, when he discovers that aliens have ued subliminal messages in just about everything there is a war started to stop the source and expose it.

I highly recommend this film, if you can get it cheap go for it, but I am waiting on the Special Edition(I still have my VHS Copy in great condition). Other Carpenter films to check out is Vampires, Escape from New York, Escape From L.A AND Memoirs of the Invisible Man.

Drifter John Nada blows into an L.A. suburb looking for work, only to discover an underground operation that’s “wise” to what’s really going on in society. Turns out, the rich and powerful of the world are really ugly aliens that are enslaving the working man and keeping the human population “asleep” with consumerism. Mankind’s only hope is to be “waken up” but with the police force, the government, and Roger Ebert on the alien’s side, John has to bring out the ultra-violence.

John Carpenter is a director that I have a very soft spot for. I’ve grown up on many of his classic films – Halloween, Assault on Precinct 13, The Fog, Escape from New York, The Thing and They Live will always stand out as nostalgic gems for me. But more than just sentiment can be found in Carpenter’s films. Each one is always a unique, gripping, and thoroughly entertaining oddity that promises a kind of genre film that’s above-average. They Live is no exception. The beauty of this film is it’s ability to swing from chilling scenario, to humorous action at the drop of a dime. Carpenter finds a great balance between a creepy sci-fi tale, tinged with social commentary (very Romero in a way), and a blazing action flick with more one-liners than a Bond film.

Perfectly cast as our hero is “Rowdy” Roddy Piper, someone who should be no stranger for wrestling fans, even minus his trademark kilt. Piper chews the scenery up with his bombastic, bigger-than-life performance. In one of films funniest scenes he engages in an outrageously extended fight sequence with Keith David (of The Thing fame) that goes on for nearly ten minutes. It’s absurd, but that’s the point, not to mention the fact that it’s tremendously fun. Anyway, the alien effects are suitably wild, riding a line between innovation and creepiness. Some critics have called the alien effects poor, but I find them to be effectively hair-raising. Carpenter lends his usual great synth score to the film and the cinematography is great, really capturing the atmosphere of the L.A. underground. All around, the cast delivers nicely.

Bottom line, They Live is a must for Carpenter fans. It’s a film I’ve come to love more with every viewing (I’ve probably seen it 50 times since my childhood) but it’s also a film that has a comment on society that’s more relevant today than ever. Anyhell-

“I have come here to chew bubblegum and kick ass, and I’m all out of bubblegum…”