Today’s Death of the Day comes from the new movie “Detention” the wonderfully manic new slasher film that is now out on home video (main review for the film here). In the opening sequence (which could stand as a wonderful short film of its own) we meet the beautiful uberbitch Taylor Fisher. Taylor is the most popular girl in Grizzly Lake, waking up and telling the audience how to be cool while yelling at her family. As she is about to leave for school, she is brutally murdered by someone dressed as Cinderhella, a horror film serial killer. Sadly there is no video of this death online so I leave you with the stills below. Check out this movie ASAP, it is well worth the watch and might just be the first horror movie of the year that is actually worth owning. 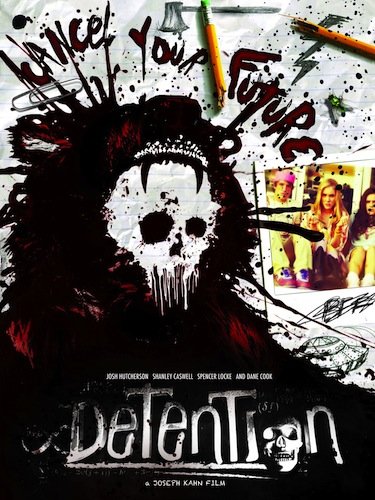 The phrase “love it or hate it” is overused when it comes to describing films in general. The term is too often applied without much care and is a way to separate oneself from the masses. Earlier this year “Cabin in the Woods” was released to many raves but I was less than impressed. Nevertheless, I couldn’t use the phrase “love it or hate it” because while I admired the artistry behind the film, I just didn’t care for the execution. It wasn’t a terrible film by any means and I understand why fans went crazy for it, it just didn’t work for me. Now we have a film that I WILL use the “love it or hate it” phrase because nothing else can possibly describe it. The film in question? “Detention”, the direct-to-dvd release (select theaters doesn’t work when it comes to horror) from Sony that, in my eyes, is the film that “Cabin in the Woods” SHOULD have been. Are you ready for the madness? Let’s dig in. 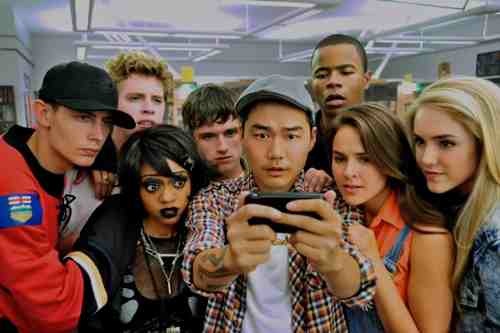 The film opens with uberbitch Taylor Fisher, the most popular girl in Grizzly Lake, waking up and telling the audience how to be cool while screaming obscenities at her family. As she is about to leave for school, she is brutally murdered by someone dressed as Cinderhella, a horror film serial killer in the movie within a movie.We shift attention to Riley Jones, a smart, rebel loner, who arrives at school where the audience is introduced to Clapton Davis, a “slacker hipster” liked by virtually everyone of which Riley has a crush on, Ione Foster (shades of “Say Anything”), the cheerleader former best friend of Riley and current girlfriend of Clapton, Sander Sanderson, Clapton’s best friend who openly makes attempts to have sex with Riley, and Billy Nolan, the school jock who is still obsessed with Ione.

Sound confusing? Don’t worry, it’s part of the fun. Wouldn’t you know it, Billy challenges Clapton to a fight after school for the right to date Ione. Since Taylor is absent (due to umm…being murdered and all), Ione is assigned as head cheerleader and Riley as the school mascot for the upcoming football game. As Riley attempts to hang herself in front of the school’s stuffed grizzly bear, she is attacked by Cinderhella. While Billy and Clapton’s fight is about to start, the police arrive to inform the students of Taylor’s murder. Barely escaping her attack, Riley tries to inform the police, but they do not believe her. At home, Riley is again attacked and manages to escape by running through backyards. The police arrive but still remain skeptical due to the similarities of her attacker and that of the film. When the group of teens show up for a drunken sex party and Billy is killed by the Cinderhella wannabe, the teens are forced to serve Detention to find out who the killer is among them. 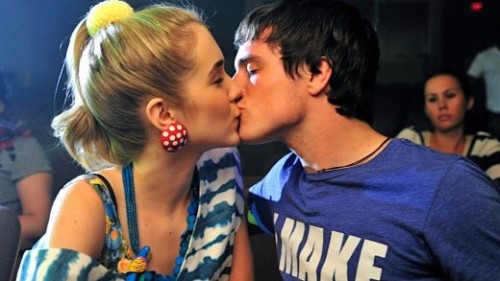 Wow..that was exhausting. Did I mention the guy with the tv for a hand, the time traveling bear, the mother and daughter that switch bodies, the UFOs, the meteor, or the parallel time lines? It’s all here in one of the strangest movies that you will see all year. A test to see if you will like this film, when a confrontation gets ugly a reply to the bully is, “Sorry, I gotta go. Hotel for Dogs is on cable.” Make you laugh or smile a little? Well then, “Detention” is the movie for you. Loaded with gore, strong performances by a more than capable cast, one kicking soundtrack, and more pop cultural references than you can shake a stick at…”Detention” is “Scream” meets “Scott Pilgram” with a dash or two of “Kaboom?” It makes for one wild cocktail. Want a drink?