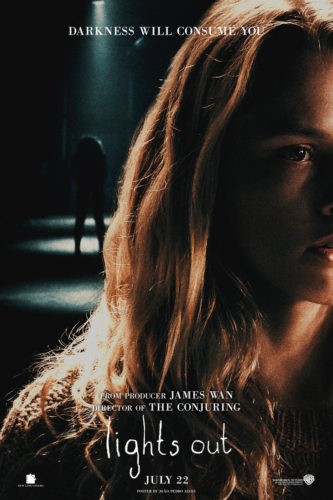 When mysterious occurrences begin happening involving a woman who only appears in the dark. A young woman begins worrying about her younger brother who is being exposed to this monster. Upon further investigation she realizes the secret behind the woman is runs close to her family. Now she must team up with her boyfriend to save her brother and her mentally ill mother. But this spirit is much smarter than she anticipated.

Lights Out is based off of the short film by David F. Sandberg, whom also directed this full length version. At first glance this film appears as a super basic supernatural film with a bunch of jump scares. This is only half of the truth. Lights Out is actually very above average compared to other “fear the dark” horror films. It is much smarter and more well-crafted than the rest. The ghost is much more clever in terms of ways to keep her victims in the dark, and ways the actually make sense and don’t seem like a cheat. Our characters are actually smarter than average as well. In scenes that may come off as them making stupid decisions, it is because they have no other choice, this connects back to the cleverness of our villain. The film also gives us likable characters who aren’t people pretending to be perfect. They have their flaws and this makes them even more likable and authentic. Our leading lady is basically bad ass grungy girl, but that doesn’t prevent her from coming off as a bitch or otherwise. As we gain insight to the leads’ mother, we get a further description of her life instead of having it verbally told to us. The film also takes deep look into depression and gives it a very haunting and metaphoric lens to the illness. But most of all the film features a high amount of intensity in the moments of darkness. It also has a high amount of jump scares. They are more less the same, but considering the entity we are dealing with there really is no other way of doing them. But despite that, the jump scares really work, and this is greatly in thanks to the aforementioned intensity as well as the perfect lighting and cinematography.

The film is really short, without credits itâ€™s an hour and fifteen minutes. But in all honesty, it didnâ€™t necessarily need to be any longer. Itâ€™s perfectly paced and doesnâ€™t go through the whole bullshitted tropes that we get in most horror films. Some may say that the final act felt rushed, I can understand that, but I thought it worked just fine. Had the final act been any longer, it would essentially be the same sequences on a loop. For its short run time we surprisingly get enough insight to our small set of characters to know who they are and feel for them. Though there was the woman from Child Protection that I felt should have been a larger part than the two miniscule scenes she had. But if there was any complaint that I have for the film, it is the really minor fact that it could have at least two more deaths. There were two characters that I felt should have been killed but they werenâ€™t.

For a mainstream horror film, Lights Out has pretty damn great performances from the cast. Especially Teresa Palmer and Maria Bello. After starring in the god awful Nicholas Sparks movie The Choice (and even giving a less than bland performance), Palmer shows that she CAN act, despite this blip on her resume. Palmer plays Rebecca as very real and authentic and doesnâ€™t phone in the role at all. Every emotion and reaction she provides comes off as believable. Bello plays the mentally ill mother whom Palmerâ€™s character resents. She plays the role in a way where you feel sorry for her even if her behavior is extremely crazed and creepy. You can really tell the woman is struggling, and Bello, the terrific actress that she is, nails it. Also worth noting is newcomer Gabriel Bateman as Palmerâ€™s characterâ€™s younger brother and Belloâ€™s son. Bateman brings a lot of innocence, fear, and confusion to the role that, again, comes off as realistic and not an over-the-top and annoying brat like in most horror films. You feel sorry for the kid because of not only being trapped in this troubled family but also with the supernatural occurrences going on. Bateman is definitely a newcomer to look out for.

For a mainstream horror film, Lights Out is easily the best Iâ€™ve seen in a while. It is a smart and well-executed film with great tactics used to provide scares, and a pretty deep meaning at its core with familial issues that donâ€™t go ignored or unresolved. Itâ€™s not groundbreaking by any means, but itâ€™s a prime example that mainstream horror CAN be good and succeed in providing scares, but also have depth.