What’s better than one horror tweet by tweet review to start off a horror filled weekend? Well two horror tweet by tweet reviews, of course. Tim Schilling, our resident Twitter reviewer, is back with a double feature of one of the great zombie double features of all time â€œReturn of the Living Dead” & “Return of the Living Dead II.â€ Tim is a HUGE zombie fan but do these 80’s zombie comedies slay him? Let’s find out..

Thoughts before the film:
Corny zombie movies don’t get better than this gem from the 80’s. #ReturnOfTheLivingDead

Thoughts while watching:
0:05 This might be the only zombie movie ever made where people have actually heard of zombies beforehand.
0:08 Leak? Oh hell no! *BANG* cue the 80’s music.
0:13 That would suck to get that chain on your face pulled off…
0:14 Such an awesome cemetery.
0:16 Yeah, deodorant, that’ll do it.
0:18 Lololol that vision test on the wall says ‘Burt is a slave diver’ I’ve never noticed that before!
0:20 Dancin naked in the graveyard.
0:26 Damn zombie making such a ruckus.
0:28 Such a strange group of friends.
0:37 Whenever something bad happens, awesome music starts playing.
0:44 I love tar man. BRAINS! Brains!
0:53 These zombies are pretty good at sneak attacks.
0:55 Woooo go midget zombie!
1:04 The scene when they’re talking to the girl zombie is pretty creepy.
1:08 Over acting is perfectly okay in this movie.
1:16 Zombies have feelings too you know.
1:23 “I see, it’s understandable you wanted to cover this up so you wouldn’t get in trouble. I see.”
1:25 The answer to everything is nukes.

Final Verdict:
I don’t think I need to explain that I absolutely love #ReturnOfTheLivingDead. There isn’t a single thing wrong with the movie. It’s way too much fun to hate. And as always: the 80’s rock. 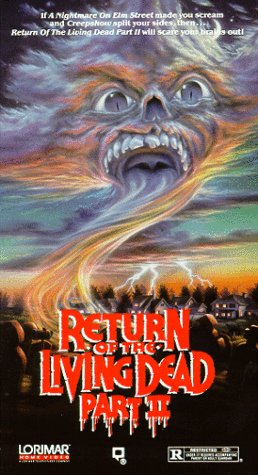 Thoughts before the film:
I just really like zombies. Great way to start off October. #ReturnOfTheLivingDead2

Thoughts while watching:
0:04 Spider-Man comic, nice choice.
0:08 Hey didn’t you guys die in the last movie!? (I obviously know they’re different characters.)
0:13 I don’t know why I like the setting of this movie. A housing complex under construction. So random.
0:18 It reminds me so much of Creepshow when the kid is in his room reading comics.
0:22 I love tar man. I think I said that last night too but whateva.
0:28 I don’t know why, but I love the screams the zombies make in these movies. So funny.
0:37 “Get that damn screwdriver out of my head!”
0:39 Zombies need to stay in shape too you know.
0:44 Hooligans!!
0:45 Possibly the coolest doctor ever.
0:47 Everyone just yells at the kid, give him a chance! He actually knows what to do.
1:02 That poor pet store.
1:05 So rich and spicy! Spicy? Yeah!
1:08 Who’s Harry Truman?
1:10 Zombie what are you doing driving that car!
1:22 Fried zombie is my favorite. Coming soon to the Big E.
1:25 Screwdriver zombie how did you make it that far? That’s okay cause you’re hilarious anyways.

Final Verdict:
I feel the same way about #ReturnOfTheLivingDead2 as I did the first. So funny, so much fun to watch, and just impossible to hate.