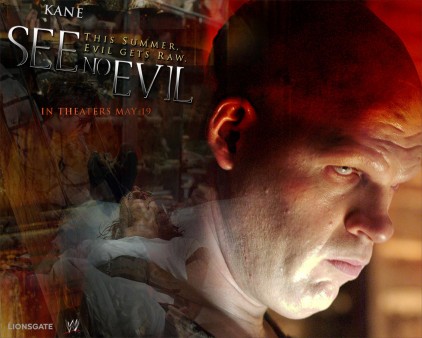 After being called to a grisly crime scene, Officer Frank Williams (Steven Vidler), loses his his partner and his arm to Jacob Goodnight (Glen â€œKaneâ€ Jacobs), only to then gun him down. Four years later, Williams is assigned to guard a group of young delinquents including Christine (Christina Vidal), Kira (Samantha Noble), Zoe (Rachael Taylor), and Michael (Luke Pegler) while they are assigned to clean up an old hotel as part of their sentence. It’s not too long after their arrival that group starts getting killed off one-by-one. Williams then makes the discovery that Jacob Goodnight has returned and is back for bloody vengeance.

See No Evil was a box office bomb despite having well-known WWE wrestler Kane as it’s villain and it’s biggest promoter. I’m not a fan of wrestling at all, so I wasn’t seeing it for Kane. But obviously as a huge fan of the slasher genre, I was really excited for this one. Although I personally thought it was fun movie, I can really understand the backlash it gets. The characters are extremely unlikeable, there’s nothing really scary about it, and the killer isn’t anything noteworthy or special. However, I do think the movie has some really great death scenes, including one involving a cellphone. The acting isn’t terrible, but nothing great. I also thought it was interestingly filmed, it has this really gritty feel to it with a lot of flash cuts (granted probably more than it really needed). And although having unlikeable characters is a no-no with horror films, I think it works here because of the fact that these are delinquents we’re dealing with, and we could care less if they die or not. Even though they try to make some of the characters likeable, there is just nothing special enough about them for audiences to care. So in a nutshell, See No Evil is style over substance.

BUT, for great kills, interesting filming style, and decent enough acting I give it…