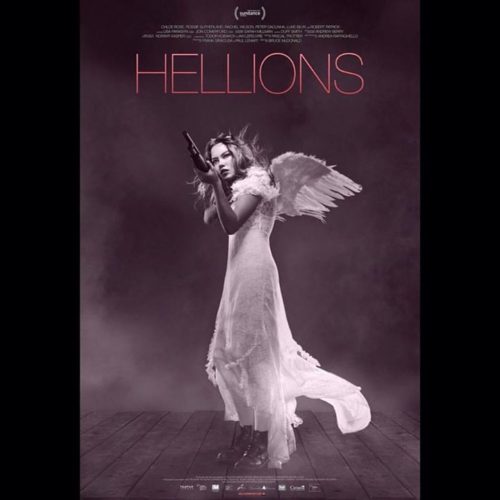 Recently I watched Hellions (2015) for the first time and it took me this long to tell you that it’s absolutely awful. I wasn’t satisfied with the direction this movie took. The story definitely had potential, but what we got instead is a sorry excuse for a movie. I can’t even describe this movie to anyone as I’m simply at a loss for words. It’s just plain weird.

There was pro life propaganda throughout the movie that really threw me off and I’m really questioning what sort of message the makers were trying to deliver. The ending is a letdown and only adds up to the propaganda I mentioned earlier. I’m not sure what the director was thinking. The Halloween set up is nice looking and all and the colors throughout the movie are vibrant, but it’s just like a cover up for that entire politically incorrect message.

I feel particularly bad for the lead actress, Chloe Rose. She isn’t the best actress, but she’s likeable enough in this movie. She deserves better roles than this one however… I do need to give credit where it’s due for the unique cinematography. Hellions is a bizarre trip that I don’t recommend anyone to take. Unless you fancy Halloween-themed movies. On my DVD cover there’s a quote that says: “A future Halloween classic.” Nope. Never. Not in a million years. For a really good Halloween-themed movie, look no further than the excellent horror anthology “Trick ‘r Treat (2007)”. You can thank me later.