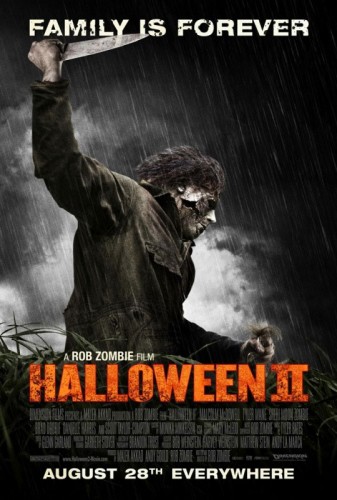 I’m one of the few people who actually liked the remake for Halloween, it gave an interesting, although, cliche backstory and the characters felt like they were developed well. My only issue with the film was Sheri Moon Zombie as another “sexy” scene and the last 30 minutes(which this was the part of the film that was actually a remake).

Now on to my review for H2, the biggest disappointment is that we know that Rob Zombie is a talented director, The Devil’s Rejects was awesome and fell in the category of being a sequel that surpassed the original(House of 1,000 Corpses), so how can he go from that to making one of the worse sequels and one of the worse remakes ever?

First off, this film was all Rob Zombie, aside from a sort of nod to the original Halloween II(the opening hospital scene)95% of the film is an original thought from his mind. The film seems to go anywhere and everything, with little bit of a cohesive story being told, but many being told. The character development of Annie and Laurie is a high point in this film, as it does focus a good deal on the aftermath of the previous film in a real way, what did suck however was the backup underdevelopment of Dr. Loomis, I love Malcolm McDowell, he’s a great actor, but his Dr Loomis I felt was so bland and just not endearing at all(in both films), whole Donald Pleasance played the character as someone who wanted to stop him, Malcolm’s begins that way and just goes further and further away from that noble person.

I didn’t mind the name that Rob Zombie gave Laurie when it is revealed what her real name was when she was a Myers, but what I dont understand was the “White Unicorn” I gave seen videos that try to examine it in a mentality sense, but if that was Zombie’s angle than his big mistake was assuming his audience was a psyche majoy. I did like the end with Laurie and hat happens with her, but like Halloween 5 went a whole new direction from what the last film did, I’m afraid a H3 may do the same.

I have yet to buy the Unrated Cut, but I will someday, just to complete my collection and hear Rob’s thoughts on where he was going with it.