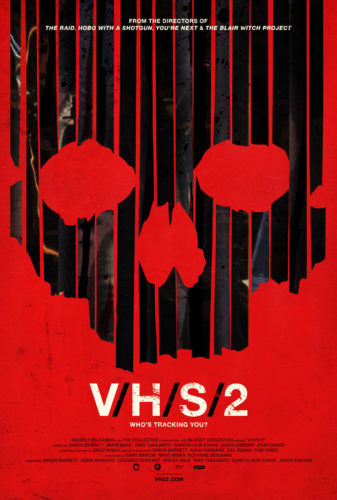 When the first V/H/S came out, my expectations were through the roof. I adore horror anthologies and this seemed like the shot of adrenaline that the found footage genre needed. To say that I was disappointed with the film would be putting it mildly. I flat out hated two of the five segments and I put the film down as having the WORST wraparound story ever assembled in an anthology horror. When it wasn’t terrible, it was predictable and trite. Now, less than a year later, we have the rushed found footage sequel “V/H/S 2” (original title being “S-VHS” which is more creative than anything found in the first film). Does the sequel avoid the mistakes of its predecessor or does it belong on a shelf need in a horror fan’s basement away from all humanity? 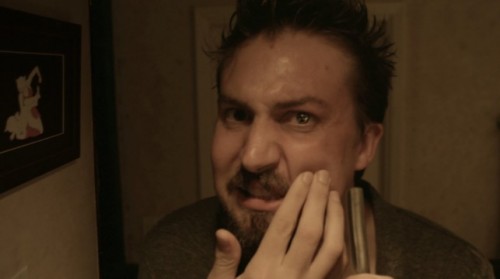 “Tape 49/frame narrative” Rating: 2 out of 4
In the wraparound, we follow two private investigators as they search through an abandoned house looking for a missing college student. Without giving too much away, I will say that this segment, like the wraparound in the original, is completely pointless because it is predictable from the moment they enter the house exactly what is going to happen. Unless the original, at least the characters here are likable even if they aren’t given much of anything to do. Overall, the weakest segment of the bunch and I’d advise the filmmakers of the next sequel to do away with the wraparound altogether. It feels lazy and just a way to add some minutes to the running time.

“Phase I Clinical Trials” Rating: 2 1/2 out of 4
A man is sitting in a doctor’s office after having had eye surgery. A camera is placed into one of his eye sockets to work as a functioning eye for him while he recovers. He is told by his doctor that everything the “eye” sees will be recorded and monitored for research purposes. Little does he know that he this will not be an experiment that will end well. He begins to see the undead as well as other strange visions at night. He is joined by Clarissa as she explains it all to him about his condition as she knows exactly what he is going through since she had a somewhat similar operation done. A bit predictable as it follows the typical “new body part comes to life” horror cliche but it works thanks to some nifty special effects and an “operation” scene that had me cringing.

“A Ride in the Park” Rating: 3 1/2 out of 4
A biker goes for a ride in the park (hence the title) only to be attacked my blood thirsty zombies who want to eat him for dinner. I’m going to leave the description at that in order to avoid giving away the bloody treats of this segment. Want to see a killer birthday party attacked by zombies with more blood and guts than in just about any zombie movie of the past few years? Dig it! This one is deliciously warped with a twisted sense of humor (I love seeing the zombies try to eat things that are obviously not meant to be tasted). One of the few segments that I honestly wished was a little bit longer. Zombie fans, eat your heart out.

“Safe Haven” Rating: 2 1/2 out of 4
A news crew is sent to investigate and do a piece on a strange Indonesian cult that is ruining their “family” out of an abandoned warehouse. This “family” is unlike any you have ever met and while they are friendly at first, they have a surprise for the head of the news crew as they have special plans for her in the immediate future. Do they plan to use her as an offering or something much, much worse? An interesting segment that is loaded with some creative death sequences and some solid acting by its leads. What prevents it from being a favorite is a running time that is far too long (at 30 minutes at least 5 of those count have been cut) and an ending that made me laugh out loud. No, it is not meant to be funny.

“Slumber Party Alien Abduction” Rating: 4 out of 4
A few months ago, I picked Detention as my favorite film of 2012. I had many readers write in calling me a “moron” or a “stupid asshole” for picking such “mindless trash” (their words, not mine) as my favorite film of the year. A dozen watches later and that film still puts a smile on my face for its sheer audaciousness and originality. Much like “Detention,” “Slumber Party Alien Abduction” plays as a big FU to the conventions of the horror genre. A group of kids are having a sleepaway when some weird things begin to happen through the camera on their dog. No, I am not making that up and I am also not making up how much damn fun I had with this segment. Creative effects and lighting go a long way here and while the ending seems a bit too mean spirited, it definitely didn’t wreck my enjoyment of this slumber party.

Overall, “VHS 2” is a much better all around experience than “VHS” was. The characters are more likable, the stories are better paced, and the concepts and ideas are stronger with some creative execution. Not all segments will hit home with all viewers but you gotta appreciate the effort. I’m ready for VHS 3!