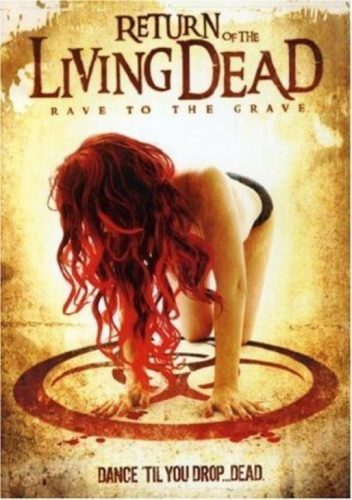 Our favorite Twitter reviewer Tim Schilling is back with the last zombie tweet by tweet review for the Return of the Living Dead series. Tonight he will be looking at zombie sequel “Return of the Living Dead: Rave to the Grave.” The film received, like Necropolis received some terrible reviews from critics and fans alike upon release and, also like Necropolis, Lion’s Gate sent the film direct to Syfy. The real question remains…is this film as bad as that unholy awfulness? Let’s dig in and find out.

Thoughts before the film:
Last one in the series… Wish me luck. #RaveToTheGrave

Thoughts while watching:
0:02 Another long and pointless opening scene of a car driving down the road…
0:08 Oh no it’s the same characters from the last movie, why are they still alive.
0:11 Come on you were in the last movie, you should know that they’re zombies!
0:20 I feel like I’m watching a detective movie.
0:22 Drugs is the answer!
0:27 If you can’t trust your drug dealer than who can you trust?
0:35 Hahahaha what the heck is going on.
0:50 I missed tar man.
0:53 These Romanian guys are so random and funny.
1:00 3/4 of this script is brains and boobs.
1:02 This movie only wins because tar man.
1:07 These guys were in the last movie! They forgot all about zombies it seems.
1:27 Poor tar man, no one will let him in their car. He’s just standing there all alone.

Final Verdict:
Well Return of the Living Dead: Rave to the Grave was definitely an improvement. Overall, just completely ridiculous that you can’t hate it