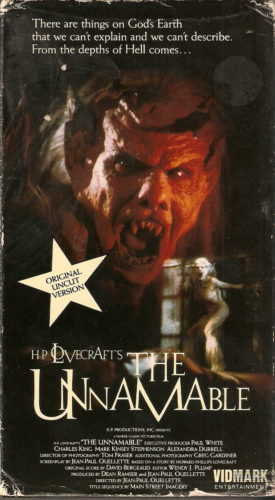 I’m not too big a fan of College Themed slashers or horrors. The setting just isn’t exciting for me. I was going to the let week slip by until I remembered my love for this only-on-VHS gem from the 80s that takes place at a college and the majority of the victims are college students, so I guess this fits the bill?

Now due to Stuart Gordon’s exceedingly brilliant based on a H.P. Lovecraft short story”Re-animator” raking in the cash greedy producers do what they do best and combed through the material finding ways to exploit it’s success and suck up more money and the late 80s-early 90s had a hand full of flicks based off of Lovecraft short stories. “The Curse” with Will Wheaton was sort of a good one and this one, The Unamable is probably my fav after Re Animator.

The movie opens with some old Vincent Price wannabe tending to a Screaming, foul, unseen creature in a decrepit mansion while his candle flame flutters in the wind. Not sure what he was expecting trying to calm a demonic she beast locked in attic but he gets a clawed hand punched through his chest and his heart pulled out for his stupidity. Cut to 30 years later and the mansion is now condemned and isolated, but is neighbors to a California university. The students are aptly aware of the “legend” that a creature roams it’s halls looking for victims.

Now this is the 1980s, do I even have to tell you that the rest of the movie consists of a group of students, every single one of them a blatant stereo type, not believing the legend and they decide they must set things right by spending the night in the hovel? And that violence ensues, brain dead characters get fate handed to them on, the ultra slut bitch meets the she bitch face to face, and the nerd and good girl escape while wannabe sorcerer spews an enchantment that can cause trees to uproot and sooth the savage beast?

This movie isn’t very original I’m sure you can tell, and not very faithful to the short story but it’s all in the execution and the directors approach gets the job done and is so 80s. This movie reminded me of Night of the Demons with it’s set-up and tone. The mansion that homes the demon from hell is very similar to Hull House. The lighting and shadows are superb, very creepy.

The movie suffers from slow pace at the start and the acting is very bad, sort of typical of genre at this point in time so it’s not that grating. The music is all right, kind of generic. The token slut was cringe worthy.

The movie’s main plus is the creature and it’s design. Wow talk about effective. I remember being terrified of this creature as a kid. There’s one scene where one characters tells his girlfriend that she’s stupid and there’ isn’t a face in the window and looks and indeed, does see the horrifying face hissing. Very effective and creepy. It made me hesitant of looking out murky windows at night. There’s something very unsettling about the look of this monster, the naked pale ass, the hooves, the horns, the breasts, the fur…it’s all very Lovecraftian and I adore it. This movie works best when it switches into slasher mold of the she-beast stalking it’s prey in the halls of the creepy mansion. That’s all you need in certain flicks.

Followed by a sequel that picks off seconds after this one with the same director, producers, actors, and a bigger budget but is somehow less satisfying and loses that great 80s feel. Sadly, it’s the only one on DVD and I had to cough up a lot of dough to get a worn VHS of this, so worth it though. Only seek out the unrated version!