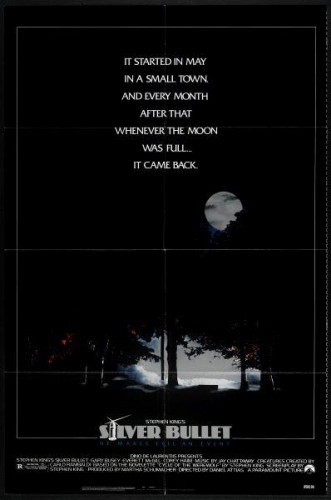 I have watched â€œSilver Bulletâ€ a many times over the years. Sadly though I donâ€™t remember the first time I saw it. I do remember renting at least twenty times at the video store they put in down the street from my house. For me this is one of the must have for any werewolf movie collectors. I donâ€™t even mind that the costume used to show the full werewolf is an obvious on piece suit more reminiscent of a school mascot than a monster. For me it was this story itself that brought this film to life. Most of the special effects done in the film are of standard quality for 80â€™s films. So since I have watched this movie so many times, much more than any other Stephen King movie, including â€œChristineâ€ and â€œCarrieâ€ it must be my favorite movie adaptation of a Stephen King story.

The film focuses on Marty Coslaw, a boy held back in life only by the limitations of his wheel chair. Not just any wheel chair mind you, his is a souped-up motorized machine. Basically it had a carriage added that held a go-cart motor and chained wheels. Then his uncle comes along and reveals his pet project specially designed for Marty, The Silver Bullet, a really souped-up road ready racer styled wheel chair. This part of the story like a lot of this film is sweet- small town- apple pie -life. Almost to the point of nausea. There is a unknown virus that plagues Stephen Kingâ€™s writing that I call â€œThe Norman Rockwell Syndromeâ€. Every story is a fragile veil of perfect Americana platitude, filled with wise laid back elders sitting in rockers on Main Street and children happily playing in neighborhoods filled with white picket fences on sweet summer days. However it is a thin veil that is stained with an underlying darkness that Stephen King masterfully gives breath to in his work. Unwed pregnancy, at a time when it wasnâ€™t common in the high school hallways, alcoholic and abusive fathers and evil that permeates just under the skin of every organic structure in a civilized community. These are the contrasts in just about all of Stephen Kingâ€™s films and stories yet to be made into film. So is the case with â€œSilver Bulletâ€, a small town of pleasant happy people going about their humdrum lives until once season when a monster comes to town to feed.

And brilliantly in this film the monster is a Reverend by day! Can you get more dark and poignant in a horror story than this! A paralytic kid faces an unholy creature masked in the most trusting of images. It is awesomely terrifying and considering the things that have come to light in more recent years about religious figures full of scandal, a very observant cautionary tale. The perfect comedy of nightmares in which the lesson is â€œbeware the wolf in sheepâ€™s clothingâ€! This is a side of life in rural America and urban alike that most either choose to ignore because they cannot handle the darker side of life or they just flat out feel it is non of their business. â€œSilver Bulletâ€ plays with this concept perfectly by having no one that Marty can turn to but his sister and his â€œcrazy uncleâ€ for help. Reluctant help, Marty has to play a lot of pity tricks to persuade his sister to believe him before they set out to investigate the good Reverend.

This film hits hard with the whole â€œtragic endingâ€ scenario. As the story plays out we get to witness the death of pregnant woman, unwed and on the verge of suicide, not to mention the brutal slaying of Martyâ€™s best friend after a peaceful day of kite flying in the park. There is the sneak attack on Tammy Sturmfullerâ€™s abusive, mean father but letâ€™s face it, his death was a joy to see. Tammy is the girl that Marty is sweet on in the film but that ends after her old manâ€™s death. So here we have a kid in a wheel chair who is sure the local preacher is a werewolf, whoâ€™s best friend is killed, whoâ€™s girlfriend moves off, and no one believes. I have to say that it is a great set up for a few scares, tense scenes that I still hold my breathe on even though I know the outcome already, plus one really awesome sequence that really gives us our â€œwolfieâ€ treats. Watching as the Reverend tries to give a sermon as the whole congregation begins to turn into werewolves is probably my favorite scene next to the local vigilantes scene that sees several of the â€œbilly bad-assesâ€ killed by the monster. Right up until the final chapter where Marty, his sister and his uncle face off with the wolf this film is perfect in every aspect of story telling with dramatic and tense build up. It is hard not to feel a bit deflated when the werewolf is fully exposed under the harsh lights of reality as man in a suit, if I said otherwise it would be obvious I was â€œshit-for-shineâ€ in this review. Still that acknowledgment aside the film keeps a strong air of suspense until that final moment.

â€œSilver Bulletâ€ has a classic character that relates to anyone who ever played way past sun down as a kid then realized your error as you rushed home to the visions of every nightmare or scary story read or heard floods you right up until your feet hit that threshold and your hand is on the door knob finding your way safe in the warmth comfort of home. There are stereotypical players here that make you long for the horror which is purposely drawn out for a steady build. The film offers images and concepts of moral corruption by long believed trust-worthy members of the community while teasing with quick and brutal deaths of characters that traditionally should be safe from such a tragic ending but in the realm of Stephen King become fair game. Most of the special effects as far as the werewolf transformation are traditional make-up tricks common in horror before this wretched CGI crap began to take over, and the story is a true tale â€œDavid Slaying Goliathâ€ as only the master of horror could tell it, with sweet sounds echoing through calm streets disarming all who venture into his realm where the dark terror that lurks just beyond the orderly construct of a Rockwellian life wait to feed.