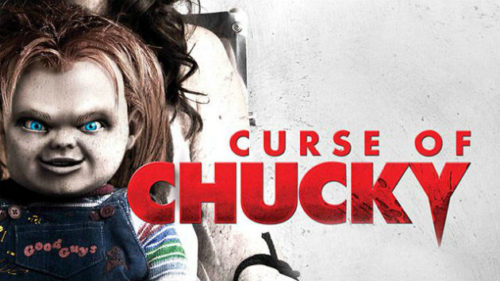 What follows is a brief, spoiler free review. If you love Chucky as much as I think you might, don’t like ANYONE give away the twists in the final act.

If ever there was a fan boy horror movie on Chucky, “Curse of Chucky” would be it. With references to all of the previous entries in the franchise, this film is a delight from beginning to end. As “Curse of Chucky” begins, we meet the lonely Nica (played by Fiona Dourif in a wonderfully understated performance) as she is living with her mom in house in the middle of nowhere. Her mother wants to keep her sheltered from the rest of the world as Nica is confined to a wheelchair. One day, the two receive an anonymous package in the mail with a doll inside. The doll is Chucky and he is ready to play. When an unfortunate “accident” causes her mother’s death, Nica’s greedy relatives are back to claim the house and sell it to make a few extra bucks.

After the rest of Nica’s family arrives including her bitchy older sister Barb (nicely played by Danielle Bisutti) with her daughter Alice (Summer H. Howell), it is up to the family to survive the night to keep from becoming Chucky’s latest victims. And victims many do become with a bloodbath that results in a few grisly deaths that had me smiling.

Though the film starts with a slow buildup in the first act that results in two off screen deaths (don’t worry, like I said, the film does get bloody), the film nicely comes together in its second act to become one of the best made for video horror movies of recent years. To go on and tell you what REALLY works about this film would be to give away way too many of the devilish surprises. Let’s just say that fans will cheer in delight as the film hits its final act as there are in jokes, references, and homages to just about anything and everything Chucky has done in the past. The backstory might not be fulfilling to some and there might be some leaps in logic, but this is the rare horror sequel that actually appears to be trying to add something new while being faithful to what came before it. If you are a Chucky fan, you owe it to yourself to check this one out. Also, make sure to stay after the end credits for one treat of a scene that will leave audiences howling. Thanks for returning Chucky, you were missed. Now, let’s see some more Chuck!