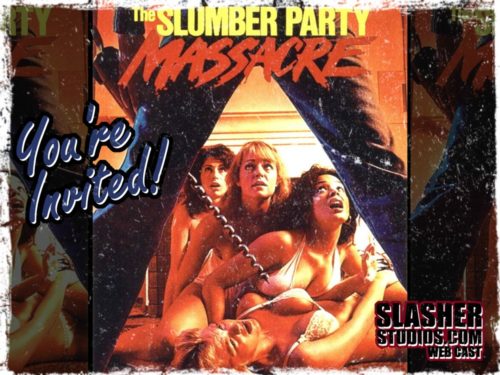 On a very special webcast, hosts Kevin Sommerfield and Steve Goltz will be talking to Tony Brown. Brown is the webmaster of the ultimate Slumber Party Massacre fansite, The Old Hockstatter Place. Anything and eveyrthing you’ve ever wanted to know about the cult slasher series will be revealed in all its bloody goodness. Make sure to listen in and call in this Sunday night at 10PM central with any questions you may have about the series. You bring the pizza, we’ll bring the drill! Click on the link below to listen live or to check out one of our previous episodes. 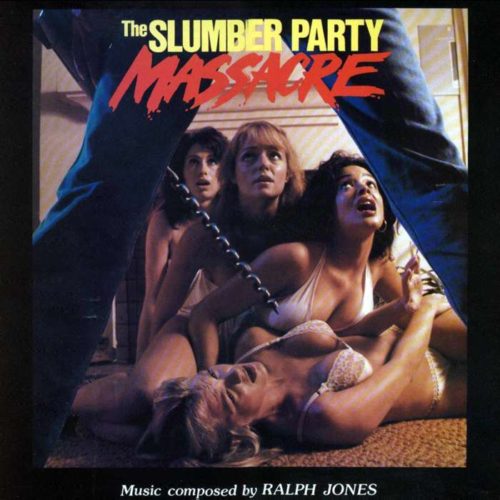 Trish Devereaux (Michelle Michaels), an 18 year old teen decides to throw a slumber party while her parents are away and their neighbor Mr. Contant (Rigg Kennedy) is given the job of checking in on the girls during the night. That morning, she gets up, dresses and heads to school. Meanwhile, a mass murderer with a fondness for power drills, Russ Thorn (Michael Villella), has escaped from prison, killed a telephone repair woman (Jean Vargas) with a power drill and steals her van. Trish meets up with her friends Kim (Debra Deliso), Jackie (Andree Honore) and Diane (Gina Hunter) and the girls on her basketball team. The new girl, Valerie Bates (a sweet Robin Stille) is invited by Trish, but refuses after hearing Diane talking cruelly about her.

Russ Thorn watches the girls leave school from the van and a girl named Linda (Brinke Stevens) goes back inside the school to retrieve something, but is attacked by Thorn and murdered with a power drill. That evening, the party and the bloody decimation begins of the girls, as they smoke pot and talk about boys. Valerie lives next door conveniently and is babysitting her younger sister Courtney (a refreshingly innocent if slightly annoying Jennifer Meyers). Diane’s boyfriend John (Jim Boyce) and two other guys from school Jeff (David Millbern) and Neil (Joe Johnson) who spy on the girls undressing. Thorn kills Mr. Contant, drilling through his neck, and meanwhile, Courtney is begging Valerie to go crash the party, but Valerie protests. All hell is about to break lose at this party.

Probably the best known of the popular “girls have a sleepover and get murdered one-by-one” subgenre of horror movies. “Slumber Party Massacre” is fun, a little bit cheesy, and quite outdated. The film moves at a snail’s pace throughout the first half and when the killer is reveled, he isn’t exactly frightening. This is a prime example of ripe 80’s cheese. That being said, this film is a blast. Sure it a bit slow but the deaths are pretty damn interesting and it is nice to see a final girl who is actually willing to fight back. At a lean 75 minutes, this is the kind of meat and potatoes horror movie that Hollywood simply doesn’t make anymore. “Slumber Party Massacre” has the breasts, the blood and the beauties. What else could you want from an 80’s slasher flick?

Interesting Facts about SPM:
* The film was given a limited release theatrically in the United States by New World Pictures in November 1982. It was later released on VHS by Embassy Home Entertainment.

* Director Amy Holden Jones made a shot a promo film of the original script’s prologue for a $1,000 dollars so she could get a directing job from Roger Corman. Corman was so impressed by the promo that he asked Jones to make a feature length movie from the script.

* Andree Honore is the only cast member featured on the original theatrical one sheet poster. The blonde woman lying on the floor is late actress Jillian Kesner.