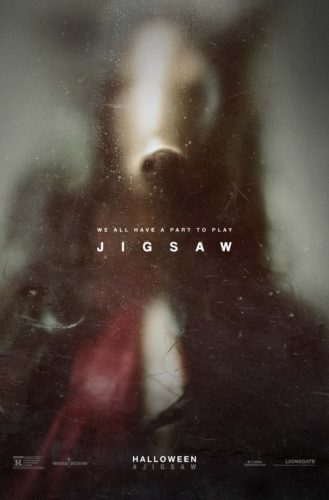 A decade after the death of John Kramer, bodies begin turning up with the Jigsaw Killerâ€™s trademark puzzle piece cut into their skin. Cops and medical experts are baffled. Thereâ€™s no way Jigsaw could still be alive? Could he? Or is a new copycat continuing his legacy? The clock is ticking while they must figure out the mystery while a new group of people are playing one of Jigsawâ€™s deadly games.

Thereâ€™s no question about it that the original series can be considered a classic, and obviously successful. But is that a reason to resurrect a series that doesnâ€™t need to re-live and (for the most part) ended well? I really donâ€™t think so. And whatâ€™s even worse is that Jigsaw doesnâ€™t even attempt to offer anything new to try reassure these thoughts. This latest entry (reboot?) has no originality whatsoever, and instead chooses to pull key twists, and even similar traps, from the original series and places them into this film. Sure there are some interesting newer traps, but there are far more impressive ones in the past films. When the identity of Jigsaw is revealed, yes you could that is a surprise, but overall all of the twists and turns donâ€™t work at all because the original series already did it. This series is also known for itâ€™s gore, this entry is actually pretty fricken tame, and the gore is lackluster. The script itself, besides not being original, is also very thinly written with very little going for it. The fact that it moves at such a brisk pace is both a blessing and downfall. Instead of making this a treat for the hardcore fans of the series in just one film, they choose to bring this in a direction of a potential new series (I REALLY hope to god they donâ€™t do this). Sure it has the things youâ€™d like about a Saw film, but they hardly do enough with it to make this entry serviceable or worthy of being made. On a positive note, it is well-filmed, and the acting is pretty decent. I will also say as a warning, the trailer gives much of the films away, especially most of the traps. Thankfully they donâ€™t give the most interesting one away. And I admit it does do the job of bringing me all the way back to the 2004-2010 era when Saw was the big thing. Oh the good old nostalgia of a decade ago.

Jigsaw is a sad reboot that offers nothing new to the original franchise that hasnâ€™t been done before, even down to the twists. The traps (while are also hardly anything exciting) are really the only thing I can see why you would want to watch the film. But even that is hardly worth it. Do yourself a favor and re-watch the original series over again. Itâ€™s more worth your time, and youâ€™ll basically be doing that with this movie, but without the fun or even suspense.