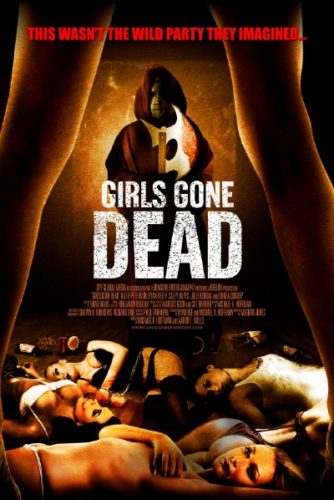 Remember when horror movies were fun? Back in the 1980’s, all you needed was a masked killer, some somewhat attractive teens (saying “hot” may be a bit of an overstatement), and a couple of buckets of blood. Mix these ingredients in the cinematic slasher blender and out came a slasher flick worthy to show your friends. Today’s horror world is a different place. In the world of found footage horror, cheap just is never cheap enough. Why pay for a couple of gallons of blood when a door can slam shut several times for a “scary” effect? Yawn. This is not the horror that I grew up with and it is certainly not the horror that I am proud of today. Am I the only one who misses the classic era of slashers in which the filmmakers just wanted the audience to have a good time? Clearly, judging by tonight’s film, I am not. From directors Michael Hoffman Jr and Aaron T. Wells comes the delightfully entertaining “Girls Gone Dead.” If ever there was a cinematic valentine to the 80’s slasher, it is this film.

“Girls Gone Dead” starts off a little rough as we meet our main girl (A.K.A. the “pure” one) Rebecca (Katie Peterson who reminds me of a prettier and more talented Tara Reid) having a nightmare involving a sacrifice in a church. The girl who is to be sacrificed is not pure and must be killed to rid the world of evil. Thankfully, Rebecca wakes up from this nightmare to be confronted by her mother who is terrified that her weekend vacation with “the girls” will turn into an orgy of sin (shades of “Carrie” & “Slumber Party Massacre II” here). Of course her mother is right and Rebecca and the girls plan to drink as much as possible, get naked, and find some guys. What Rebecca and pals don’t know is someone has come along for the ride slashing each and every one of the girls, and the guys they meet along the way, until all the “evil” has been cleansed from the world.

This is the kind of film that many will either love or hate. The acting is a bit all over the map with many of the girls hired more for their ability to take over their tops than deliver their lines. The film is far too long at 102 minutes and it takes to take its sweet time getting to its final reveal. Also, speaking of final reveals, this has to be one of the most predictable whodunit slashers that I have seen in recent memory. If you don’t figure out the killer from the second this character walks on screen, you haven’t seen enough horror movies.

So, what works about this film? Everything else! We get some ooey gooey slasher deaths with more blood on screen than all of the Saw sequels combined. This killer is brutal. We are talking multiple decapitations, a cut off breast, multiple amputations, and that’s just in the first half of the movie! Thankfully most of the effects are practical so there is no obvious CGI to put a wet blanket on the gore. Though the CGI does rear its ugly head in the final death scene and the result is…not terrible, I guess.

Need more reasons to watch this slasher? How about cameos that include Jerry â€œThe Kingâ€ Lawler as a sheriff, Beetlejuice & Stockbroker Sal from “The Howard Stern Show”, Iron Maiden drummer Nicko McBrain, porn legend Ron Jeremy, and, in my favorite cameo, the “Queen of the B’s” Linnea Quigley as bartender Wild Willie. A blast from beginning to end, this is the kind of movie that just puts a smile on my face. Whether you rent it from the breasts, the blood, or maybe a combo of the two, you are sure to have a great time with “Girls Gone Dead.” Have fun with it, it looks like everyone who made it did!