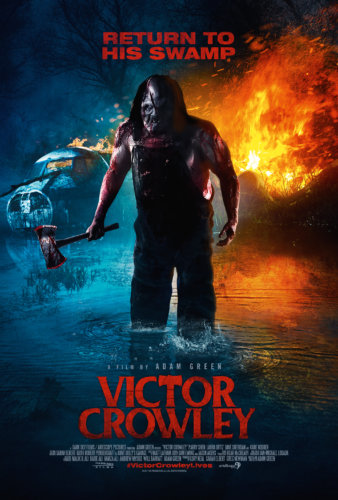 Picking up ten years after the events of the first three films, Victor Crowley is resurrected by a group trying make a trailer on their upcoming movie about the events. Meanwhile, the sole survivor of the original massacre, Andrew, along with other passengers crash into Crowleyâ€™s swamp, now the group must survive Crowleyâ€™s returning mayhem.

I didnâ€™t get to see this movie during itâ€™s limited release and run back in late 2017, so I was excited as hell to finally watch this when the Blu-Ray came out. And I was not disappointed; I love the first three films, even if some were better than others. This is one has its flaws, but itâ€™s still an extremely fun, campy slasher film that live up to the others in that respect. Now, I admit this wasnâ€™t a sequel that we really needed, but itâ€™s one that can definitely be welcomed. The cause of bringing Victor back was so ridiculous that if this wasnâ€™t a Hatchet film, it would have been terrible. This entry definitely ups the camp factor, and at some points it works, and sometimes it doesnâ€™t. For example, there are a few jokes that didnâ€™t work for me at all, they were a lot cheesier than they should have been, even if they didnâ€™t make me chuckle slightly. Now, it certainly wouldnâ€™t be a Hatchet film without the gory kills, and naturally it delivers there, with good practical effects of course, though there was one death I found was done a little in poor taste.

Adam Green is easily one of the best horror directors around today, he can do fun slashers like this, intense thrillers like Frozen and Spiral. This guy knows his audience has all of the passion of a horror fan to bring his work to life and please audiences. There are a couple of things with this entry that the last two films lacked, there was surprisingly a good amount of character development, people didnâ€™t exist just to kill off. And the characters at hand are actually pretty fun to watch, and most you actually want to see survive. I was surprised with who ended up being the final girl when it made it look like it was going to be someone else, so the play on character tropes was a nice touch. This one also had a surprising amount of intense moments, including one extremely well-crafted and well-timed jump scare, yes, I jumped at it. The use of its one-location in the crashed plane for most of them is well-done and doesnâ€™t drag it down. Finally, we have the cast. Everyone is totally having a fun time with their roles and eating it all up. Laura Ortiz kills it as the feisty best friend who actually has more to her than meets the eye. Parry Shen turns in a solid return as Andrew and gets a lot more to do in this film. Dave Sheridan is hilarious as the wannabe actor who wants to play hero throughout the film despite being kind of an idiot. Kyrstal Joy Brown nails the role as the bitchy t.v. personality and ex girlfriend of Andrew. Katie Booth does a good job as the passionate filmmaker that finds her dream being crushed by Crowley. Tiffany Shepis turns in a strong performance as well and offers some pretty great emotion in her role. And finally, and most of all is Felissa Rose who is just incredible as Andrewâ€™s pill-popping publicist Kathleen, and her over-the-top performance is just fantastic.

If youâ€™re a fan of the Hatchet films, you wonâ€™t be disappointed with this entry. No matter the aspects that may not sit well with you, Adam Green returns to give viewers everything you love about the films, and even a little bit more with extra thrills and developed characters. And definitely stay through the credits, there a mid-credit scene that genuinely made me cheer.