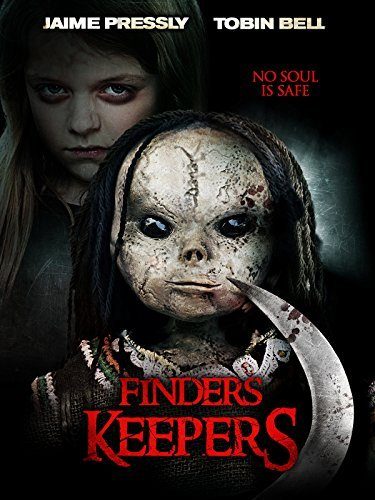 Finders Keepers is a SyFy original TV Movie starring Jamie Presley. The story follows a young mother and her 6 years old daughter who, after separating from her husband, move into a new house which unknown to her holds a deadly past. After her daughter Clair finds a doll hidden under the floor, Alison (Presley) begins to notice some very disturbing changes in her daughters behavior. After some very strange and random deaths occur, she begins to question the dolls and the houses history.

Finders Keepers is a made for TV movie and it certainly shows. Although the performances were decent, it was typical of a low budget TV movie. The acting from the main actress was good at times but still felt flat. The surprising performance was actually the daughter. Although the actress is only 11 years old, I found her to be the life of the film. For someone her age, she really was the star of the show.

Although it was not the best in its genre, I found myself somewhat enjoying the film. It lacked much of a plot and didn’t give us much character development, especially by way of the daughter. However with a few genuinely creepy moments and a jump scary that was half decent, Finders Keepers is a film I wouldn’t exactly say I recommend. However, if you are looking for a film to pass the time and want a quick watch, as the film only runs for 88 minutes, then this is the film for you.