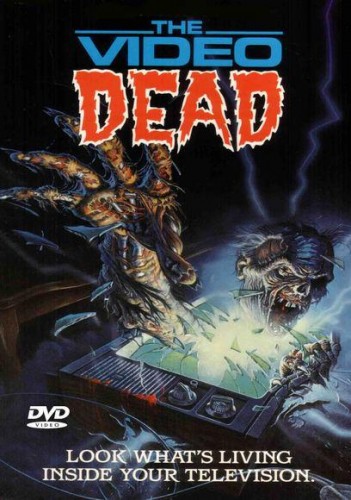 An absolutely underrated 80ies treasure. I’m so glad I invested money in this old battered VHS copy. Apparently MGM released a DVD? I have yet to find one.

Where else can you find a movie that has zombies come out of the t.v., zombies popping out of washing machines, zombies giggling and laughing as if they’re on acid, zombies killing with arrows and chainsaws, a messenger who calls himself the “Garbage Man”, a David Bowie ringleader zombie…

Got to love the plot. Burly drunk writer gets a mysterious old t.v. delivered to his house in suburbia that only has one channel that’s playing a movie called “Zombie Blood Nightmare”. Well the writer hates zombie movies and turns it off, but the movie keeps turning back on all by itself even without the cord plugged in. Well for reasons unknown to me, zombies come out of the t.v., and kill the writer. We don’t actually see the kill, but the next shot shows the writer dead with a party hat on his head. Yes, we have our first Zombie movie where the Zombies are more like Gremlins who love to party and have childish senses of humor. The scene where the Bride Zombie and Professor zombie start cackling insanely when they wreck the blender was so absurd. I joined them in their laughter.

Well, after the writer is killed a title is inserted “3 Months Later” and we then have the now vacant house of our for mentioned writer being bought by a family. Well for convenience of the plot just the two teenagers are arriving, mom and dad are in Egypt or some lamely thought up crap. The male teen meets up with a blonde skank down the block to investigate the now zombie mayhem that is ensuing. Did I forget to mention that during the 3 months the zombies just chilled out in the woods? Well after some shoddily so bad they’re great deaths (which I never thought I’d see as Zombie deaths) the movie begins to really get started.

The zombies don’t eat flesh, but instead hate humans because they remind them that their dead, so hence they kill them with gremlin like shenanigans. Well with the help of a fat Texan and some advice from our infamous “Garbage Man” (“get a mirror, and tape it on the outside of the t.v.”), our plucky teens fight the zombies, but they better be careful as the David Bowie zombie has grown affections ala Leatherface part 2 for our blonde skank.

After a lot of schemes involving a kick ass scene where our male teen is chased by bride zombie with a chainsaw, a dream sequence, a booby trap ploy with strings and ringing bells, the zombies are killed off by eating dog food and ballroom dancing, where they all go crazy and eat each other. (i’m not kidding).