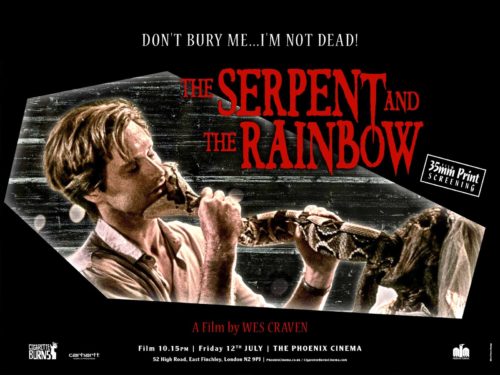 Last night I watched “The Serpent and the Rainbow (1988)” for the first time. This movie is directed by the late Wes Craven (A Nightmare on Elm Street, Scream) and inspired by the book of the same name by ethnologist Wade Davis. The cast includes Bill Pullman (Independence Day), Cathy Tyson (Mona Lisa), Zakes Mokae (Waterworld) and Paul Winfield (The Terminator). I’ve had the DVD of this movie in my collection for a little over a year now. Wes Craven was and will always be my favorite (horror) director. May he forever rest in peace as his body of work will live on and be passed on to generations to follow.

For the most part I’ve heard great things about The Serpent and the Rainbow. I didn’t know a lot about this movie beforehand – besides the fact that it’s about “voodoo”, so I almost went in completely blind. As a result, I ended up only liking this movie. The storyline is compelling enough and the Haiti setting was an added value. The acting performances are convincing. Bill Pullman was great as the lead character. Wes Craven did an excellent directing job here. The creepy hallucination scenes were visually and effectively well crafted. The soundtrack in this movie was superb. It’s obvious that Wes was trying to step on original ground with this movie and I applaud him for doing that. With that being said, I did have my fair share of issues. The first hour has some painfully slow and dull moments. I can only blame the pacing for this. The movie felt way longer than the intended 98 minutes running time. It’s hard to believe that the original cut of the film was three hours long! I can honestly see myself forgetting about the content of this movie within a week or two.

This isn’t my favorite Wes Craven movie by all means and I don’t think I’ll re-watch this a lot of times. This doesn’t take away the fact that The Serpent and the Rainbow is a good movie. It’s watchable and has rightfully developed a cult following since its release, but I’m on neither of the love/hate sides.