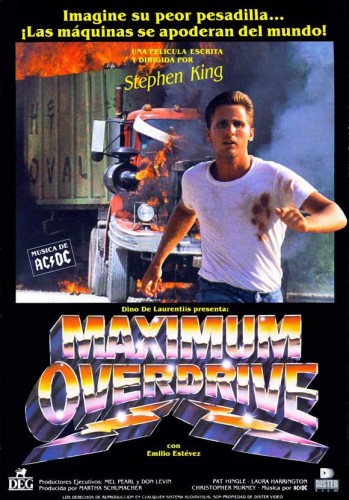 Maximum Overdrive sputtered and died on its way to theater and television screens. It was a victim of heightened expectations for first time director Stephen King, and the movie underwhelmed the world with its cornball gore and throbbing AC/DC soundtrack. More than 25 years later, it may finally be time to appreciate this 1986 movie as the trashy exploitation film it was meant to be appreciated.

King adapts his own short story â€œTrucksâ€ for the big screen. The movie trots out a flimsy â€œcomet in spaceâ€ story to rationalize a world where machines come to life and attempt to destroy humanity. From there, King places the action at a truck stop where a group of people, led by star Emilio Estevez, try to stay alive and escape semi-trucks aiming to splatter them up and down the highways.

The mistake people make in watching Maximum Overdrive is assuming Emilio Estevez is the star of the show. He isnâ€™t: The AC/DC soundtrack is. The droning, electric blue-inspired buzzsaw of their greatest songs haunts the film and sets the tone. This isnâ€™t a film about surprises or tension. This is a film about bad attitudes and bleak future outlooks. Critiquing the film based on plot and character development damns it quickly, but ignoring those elements to focus on the tone of the movie gives viewers a grisly, sarcastic view of modern frustrations.

AC/DC updates American blues music with a dirty, electric swagger. Maximum Overdrive, in a way, is the AC/DC of haunted house films. The â€œghostsâ€ have become the machines all around us. If the film lacks resolution, so does this electronic and mechanical world.