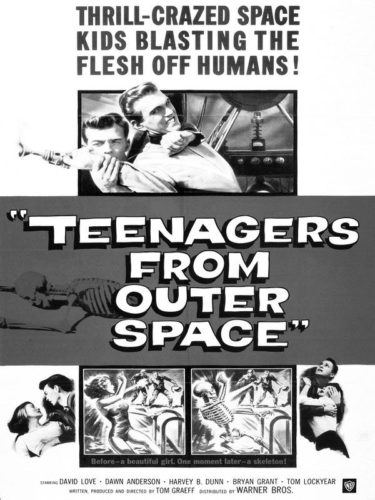 In the bland, dull deserts of Cold War era California, a flying saucer lands and some space teens, complete with plastic ray guns, hop out. Their plan, to harvest mankind as food for their huge protective space monster (the shadow of a lobster) and to reduce any agressors to skeletons with their “ray” guns. Alien teen Derek (don’t ask) instead wants to make friends and take his Earth girlfriend Betty out. It proves to be difficult.

Teenagers from Outer Space is one of the best examples of a movie that’s so-bad-it’s-good. It must surely be on par with Ed Wood’s infamous B movie “Plan 9 from Outer Space” in terms of its campy badness. You have it all here: a classic 50’s era tale of alien invasion, a cast of very gulible white people, a flying saucer that looks like a silo top, banal dialog about evil and goodness, very fake props, an etheral music score, and one of the most laughable monsters ever to appear on the Z-grade big screen. It’ absurd, it’s cheap, it’s very 50’s, but it’s terrifically entertaining for B-movie fans. Despite it’s long list of cheesy flaws and laughable quality, I find myself enjoying it for its ineptness. In fact, recently my death-doom-black-Viking-experimental-funk-folk-grindcore-metal band, Sinnabon, adapoted the giant, flying lobster monster as its mascot. Surely, this will be the biggest claim to fame that Teenagers from Outer Space has ever had!