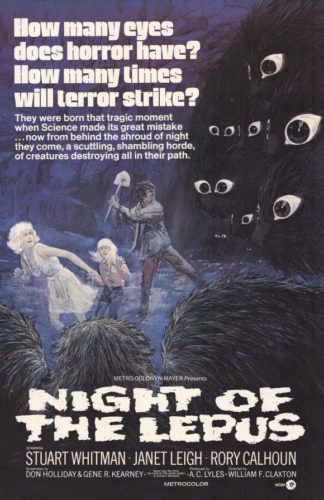 In rural New Mexico a plague of rabbits threatens the local farmers. Enter well-meaning scientists who, through a mistake of freak science that can only occur in B horror films (right?), accidently make giant, killer rabbits. Now with a super-sized problem on their hands said giant killer bunnies roam the countryside eating the locals. Thanks SCIENCE!!

In the world of nature-strikes-back horror we’ve seen almost everything. Killer sharks, birds, snakes, rats, spiders, gators, worms, orcas, piranhas, dogs, bears, and various kinds of fish-monsters and giant lizards. It truly makes one wonder if rabbits were thrown in as a joke but suddenly taken seriously, well, as seriously as it could be taken. But yes, Night of the Lepus is a horror film about killer rabbits and their flesh wounds run deeper than anything Monty Python ever dreamed of. It’s based upon the Australian novel “The Year of the Angry Rabbit” – yes, truth is stranger than fiction. To say this is a memorable entry in the world of cheesy B-movie delights isn’t enough.

When viewed the film, which boasts a surprisingly good cast of familiar old school actors (the late-great Janet Leigh for one), is actually decently made for a B picture of its era. What makes this film such a riot though is the unintentional hilarity of its subject matter. Watching hordes of obviously normal-sized rabbits bounding across minature countryside, as people scream in horror, it’s a cross between being bizarre and downright hilarious. Even Leigh once said she thought the movie was utterly laughable and only agreed to appear in it for a paycheck and the convienant location. In all of the promotions of the film, the marketers made sure to avoid any use of rabbits as monsters, for obvious reasons. Even to this day, Night of the Lepus still makes the lists of so-bad-it’s-good cinema.

Anyway, I enjoy it and proudly count it as one of my favorite tongue-in-cheekers. But then again, my love of the absurd goes pretty far out there.