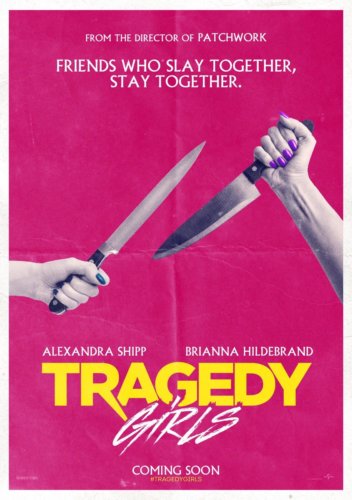 Two teenage girls who have an obsession with death and serial killers, take it upon themselves to trap a murderer to teach them the ropes. After his refusal, the girls take matters into their own hands by using their classmates as examples. This is all done in hopes of gaining followers on their channel entitled “Tragedy Girls”.

Tragedy Girls is a fairly decent dark comedy-horror slasher film. It succeeds for the most part at being a slasher film by having some pretty solid kills, the humor has its moments but it wasn’t nearly as witty and filled with black comedy like I was hoping. It’s unfortunate to say that I found myself bored and waiting for more kills, most of the kills take place within the first hour, and after that it becomes more or less drama between the two leads. So in some ways you could say it’s a bit all over the place. It goes from slasher comedy, to an almost slasher version of Heathers (but much tamer black comedy), but then it goes into teen the teen drama territory as the two friends end up being torn apart. As far as the ending goes, I can accept it, but I didn’t find it particularly good because it felt very forced with how they chose to wrap it up. The script is all over the place, but the dialogue works, and I think a lot of this has to do with the very solid performances from Brianna Hildebrand and Alexandra Shipp. Their individual performances are great and they share some great chemistry as our two leads.

Overall I was a tad disappointed with this film, but it’s definitely not without its pros and occasional solid moments. What really drives the film are the performances by the two leads. I would say I recommend it, I can imagine some will love it way more than me, but in general it’s worth your time and you might have fun with it.