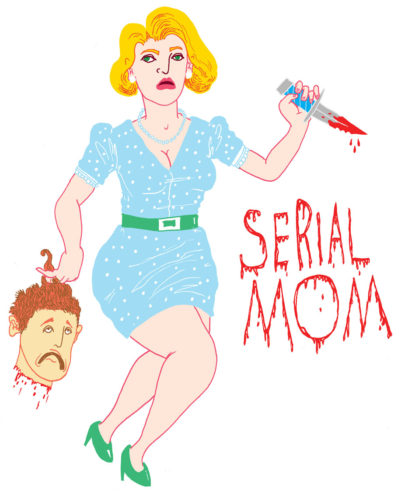 I’ve been an admirer of John Waters for as long as I can remember. I grew up with movies like Cry Baby and Hairspray. As I grew older, I went to college and discovered Waters made movies that I had no idea even existed. I grew up in the drive in era and even I wasn’t prepared for movies like Pink Flamingos and Desperate Living. They were shocking, revolting, and disgusting. I loved every minute of them. It amazed me how in a Waters’ film the hero was normally the character that would be the villain in any other Hollywood made film. He made (still makes actually) movies that were not on the fringe of society, but movies that of their own society. Characters that felt like families. Crazy families yes, but families nonetheless.

Today I will be talking a look at a movie of Waters that fits somewhere between the two extremes. It isn’t as “light” as Cry Baby or Hairspray but not as in-your-face as Pink Flamingos. The movie in question….1994’s Serial Mom. Serial Mom came at a time in society in which America was becoming obsessed with the mass murderer and giving “killers” celebrity status. How else can you explain the thousands of marriage proposals Ted Bundy received in prison after confessing to the murder of over 20 young women? It may be a serial killer but isn’t he dreamy! Nobody is perfect, right? Well, Serial Mom takes that celebrity obsession and turns it on its head. 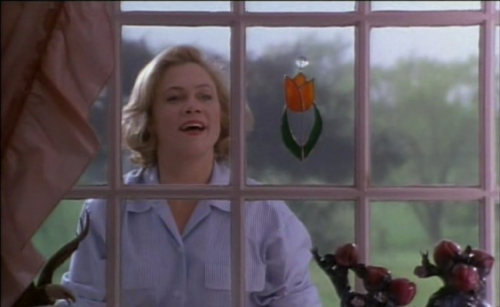 As Serial Mom begins we meet Beverly Sutphin (in a go-for-broke pitch perfect performance by Kathleen Turner). She appears to be a typical suburban housewife living with her dentist husband Eugene (Sam Waterston) and their children, Misty (Ricki Lake) and Chip (Matthew Lillard) in the suburbs of Baltimore. Behind her Doris Day faÃ§ade, however, she is a serial killer, murdering people over the smallest criticism, insult or slight. We open on the Sutphin family having breakfast and Beverly carefully taking care of family’s every needs until two police officers arrive to question the family about the mail threats and obscene phone calls to a fellow resident of the area, Dottie Hinkle (the wonderful Mink Stole). “Now who on earth would ever want to harass poor Dottie Hinkle,” Beverly states. Well of course it is Beverly. As we see a brief flashback, Beverly is still upset over Dottie stealing her parking spot at Jo Ann Fabrics. No, seriously.

The first murder she is known (the movie plays out like a true crime reenactment complete with time stamps) to commit occurs after Beverly attends a PTA where Mr. Stubbins, Chip’s high school math teacher, criticizes her son’s morbid fascination with violent horror films and recommends therapy for Chip. She runs him over with her car, killing him. How DARE he disrespect the horror genre! Bastard had it coming.

The following morning, Misty is upset when she gets stood up by a date, Carl Pageant, proclaiming her desire to kill him. Beverly cautions Misty about using words she doesn’t mean and subsequently sees the police investigating her trash cans and her car. Beverly skillfully deflects the cops’ questions before her husband asks the cops to leave. Later, seeing Carl with another girl at a local indoor swap meet, Beverly impales him in a men’s restroom with a fireplace poker that Rosemary, who came along, had purchased. 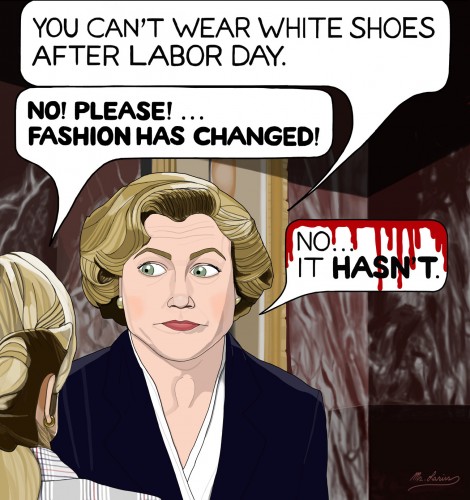 A death by blow torch for not wearing a seatbeat and a killing by rack of lamb to the tune “Tomorrow” from the movie Annie for not rewinding Ghost Dad are two more deaths for Beverly before she is arrested. Now it is on to the trial and this is where the movie really kicks into high gear. Selling everything from Serial Mom t-shirts to Serial Mom books…everyone is off to make a profit off Beverly. Even Suzanne Somers (in a wonderful tongue-in-cheek performance as herself) who plans to play Beverly in the soon to be made mini-series.

Serial Mom is that perfect pitch black satire Hollywood never makes. The film was a bomb on its initial release grossing only $6 million on a $14 million profit and that’s a shame. From the game cast to spot on direction from Waters, everything works. This is the type of movie that you will either find hysterical or you will wonder where all the laughs are. This movie makes me smile like a naughty little kid and I try to watch it every Mother’s Day with my mom. If that isn’t love, I don’t know what is.