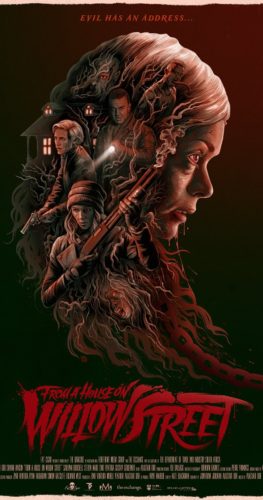 A group of criminals abduct a young girl from her home and hold her hostage in hopes of receiving valuable jewels from her wealthy family. But as the night goes on, the group feel something isnâ€™t right about this kidnapping and some much darker and sinister is going on.

I first remember hearing about this movie from Sharni Vinson during her Q&A at Flashback Weekend 2016. It sounded really good. Now, after finally watching it on its digital release, I have to say I was pretty satisfied. The movie isnâ€™t groundbreaking, but I really enjoyed the direction it took. It feels like there are two movies in one. We have a kidnapping heist movie, and then we have a possession story. Each kind of have their own separate storylines at various points and they also converge really well to keep it engaging all of the way. Thatâ€™s not to say itâ€™s without the usual horror tropes (a lot of â€œin your faceâ€ moments), some of the jumps here are good, some not. But much of the horror comes in the form of how our characters become terrorized and tormented, their own fears/demons are used against them in pretty intense ways. The demonic scenes actually work better than many other ones that have been in bigger budget/wide released films. Hell, this is a better demonic film than many of those. We donâ€™t have some lame drama or a family involved. We have these characters whom, despite being robbers/kidnappers, theyâ€™re not entirely bad people, and theyâ€™re not your usual cut-out criminals, they actually have some personality and character to them. Some you care about more than others for sure though.

For a low budget movie, the effects are actually pretty damn good, especially in the demonic scenes. The idea that these characters have to fight an actual demon as well as some of their own demons works really well in the script, even though Iâ€™m sure others have done it before, but in some ways, this one does it a lot better. Sharni Vinson is our lead in this movie and sheâ€™s gradually making her way in the horror circuit and sheâ€™s a very welcoming member because really delivers in everything sheâ€™s in. She has a way of really bringing a character to life and making them feel real or someone you really root for. And Willow Street isnâ€™t any different. Her character Hazel is one who has this tough exterior, but on the inside sheâ€™s a pretty tormented person. Vinson really brings both these interior and exterior personas to the front when necessary and makes us really care about the character, itâ€™s a role I think most actress probably couldnâ€™t tackle, they would either show one side more than the other with no real balance. Carlyn Burchell is a newcomer who also really shines in this film as the kidnapped girl. Without giving too much away, there are many layers to this character too that are revealed as the movie goes on, and Burchell does just as great of a job as Vinson is expressing them all.

House on Willow Street is an extremely fun and pretty fresh entry to the demonic subgenre. The scares can get exhausting, but the more emotional/psychological horror that come into play works really well, and we have two outstanding female performances that help boost it. It definitely sets itself apart and above a lot of the garbage demon films we get released in theaters.