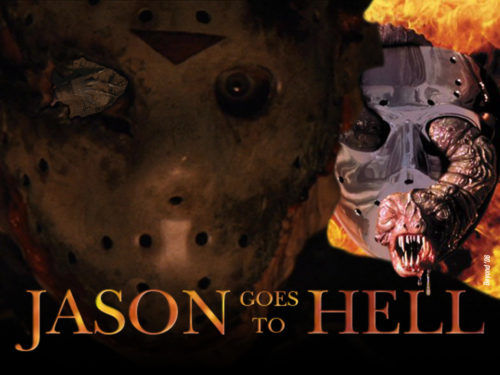 Our twitter reviewer Tim Schilling is back taking a look at the black sheep of the Friday the 13th series: Jason Goes to Hell. Scorned by critics and fans alike, how does it stack up 20 years later?

Thoughts before the film:
Besides Part 7, #JasonGoesToHell is the only movie in this series I have never seen. I get the feeling I should have kept it that way

Thoughts while watching:
0:00 Pshh watch it rated or unrated what kinda question is that
0:05 Jason, how did you come back to life this time?
0:07 What just happened.
0:13 I don’t get why they didn’t nuke Jason 7 movies ago.
0:15 This guy sounds like a dinosaur. That’s what he gets for eating Jason guts.
0:20 That news scene stuff couldn’t have been any cornier.
0:33 Geez they aren’t shy with the sex in this one.
0:36 The deaths in this one are kind of ridiculous.
0:49 Breaking his finger for information? This is fuckin dumb.
0:57 No no no no. Having the necronomicon in this is an insult to The Evil Dead.
1:06 POW right in the kisser.
1:12 Jason can only get shot so many times until there’s nothing even left to him.
1:15 I’m not sure if this plot really does make no sense or if I don’t care enough to really try to figure it out.
1:19 Jason’s a pedo.
1:27 The last scene ALMOST makes up for the entire movie. Almost.

Overall: I give credit to #JasonGoesToHell for trying to be different (it really was “different”) but no. Just no. The last scene is awesome though!