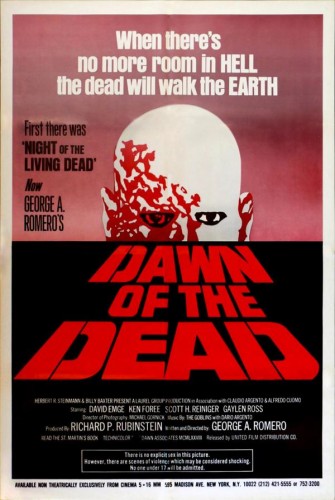 Ready for some more zombie action? Our resident twitter reviewer Tim Schilling is back with review of the second installment of Romero’s ultimate zombie trilogy (“Night of the Living Dead,” “Dawn of the Dead,” and “Day of the Dead”) and is ready to take on the “Dawn of the Dead.” Does the series still have bite?

Thoughts before the film:
Let’s hope the power doesn’t go out so I can finish the movie! #DawnOfTheDead

Thoughts while watching:
0:02 I love how chaotic everyone/the world is at the beginning of this movie.
0:10 I don’t get why they made the zombies look blue in this, but it totally works.
0:15 Those moans or whatever you wanna call those noises the zombies make is so creepy. It’s like eerie.
0:19 I always like to think they pass the rednecks from NOTLD.
0:24 Never thought of it this way buy 28 Weeks Later totally referenced this when they got chopped by the helicopter.
0:34 When they turn the music on and kill all the zombies in the mall is such a great scene.
0:49 I wanna know what that monk zombie dude is doing at the mall. I highly doubt he shops there.
0:53 She’s pregnant but still smokes. What a hoe.
0:56 Uh oh I saw JC Penney’s logo! They gonna get sued.
1:01 Using trucks to block the doors is such a good idea. This is why I will survive the zombie apocalypse and you won’t.
1:11 I don’t understand the music choices for this movie sometimes but they totally work.
1:15 Everyone is like slow zombies suck, they’re too weak. But if one basically touches you they rip your skin. Think about it.
1:24 It would just be awesome to get stuck in a mall during the zombie apocalypse. So much free stuff.
1:26 When there’s no more room in hell, the dead will walk the earth.
1:35 I love how they show how much time has gone by. Her pregnancy, the room they stay at, their attitude about everything.
1:38 That and the fact that there isn’t even a broadcast on tv anymore. It’s creepy.
1:42 I love Tom Savini. I would die to meet him one day.
1:48 Every time I watch this movie I see more and more references The Walking Dead does to it.
1:48 Latest one: it’s ours, we took it. The mall and the prison. Ta da.
1:55 I don’t get why that guy had to take his blood pressure when he was getting chased by zombies…?
2:01 It’s kind of an asshole thing to just let the girl go on her own. While she’s preggo.
2:04 And then he gets superhero music when he escapes.

Final Verdict:
Well obviously I love #DawnOfTheDead. Take everything I said about NOTLD and multiply it by like a billion. It’s a huge improvement on a already great movie. Dawn sets up such a good story for the series that it could be taken anywhere and still work.