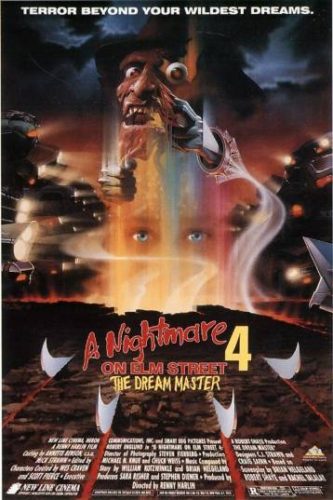 Freddy is at the top of his game. After the immensely popular “Dream Warriors”, Freddy had reached his highest peak of pop culture fame. This movie brashly illustrates the pop culture phenomena, with Freddy being less scary, and more of an icon. I admit once again of seeing all the horror franchises at a (very) young age and I don’t think I was alone as by this point in the franchise as there was a wave of Freddy toys, sheets, lunch boxes, posters, etc. Basically the statistics were rolled in, and marketing knew its age group. So yes, before I start this review, I’ll say that Freddy isn’t scary, the movie doesn’t even try to scare you, but alas, it wants to entertain, and boy does it ever.

The movie continues on from 3, with the survivors trying to get on with their lives (Kristen, Joe, Kincaid) and the beginning of the film has Kristen (now played by the less competent Tuesday Knight) having the dream of the Elm street house (which is EVEN more pimping than part 3). She gets frightened and pulls the other two in, but they get angry and don’t believe her (after everything they went through together you’d think they wouldn’t give it a second thought, but never mind). We then go into the now familiar territory of the introduction of our new batch of teens since the Elm street children are now near extinct. Alice is the only one we should really invest in since she eventually is going to take the lead as Freddie’s new opponent. Anyways, Freddy indeed does resurrect (in one kick ass surreal “regeneration” scene which is started by flaming dog urine!?!) and continues to dispatch our remaining survivors. The mythology for this sequel tries to expand off 3. It seems if Freddy kills all the final Elm street children he will forever be trapped in the dream world with no more victims so he now must find someone he can use to bring new victims, and he finds that in the very shy and insecure Alice, who inherits Kristen’s gift (after her grisly “furnace” death). One thing Freddy didn’t count on is that every time he kills someone, she inherits their special power, and gets stronger and stronger, and when Freddy kills a very close family member, Alice must use everything she’s got in a final kick ass showdown.

Although many people feel this movie is a cheat and that the series should have ended after 3, I beg to differ and felt that the closure for 3 was too abruptly done, making the ending very underwhelming, I WANTED MORE! So the sequel is a somewhat decent companion piece to 3. Bringing back the warriors was genius, and I enjoyed the continuity. Sure, I can make a stink about them getting killed, but personally since I cared so much about them from 3, their deaths upped the stakes for me. Also the new characters, although nothing that layered, the actors portraying them were competent and very likable none the less, and like part three, I cared about the kids. Also Lisa Wilcox is a revelation, creating one of the most interesting Elm Street characters ever. I was rooting for her all the way.

Another pro for this sequel is Renny Harlin in the directing seat. Not only did he create the most visually appealing sequel of the entire series, he made the movie an extremely effortless watch as well. This movie has flaws, but boring us is not one of the them. It’s so fast paced, you feel like you need to stop for a breath of air. The camera is very fluid and I loved the style. The colors are also very vibrant, lot’s of green and red lighting. Thank you Mr. Harlin, you certainly can punch a wallop with your scenes. I’ve watched this sequel countless times just for the visual visceral experience, it’s the “music video” Freddy and is the definite eye candy nightmare. 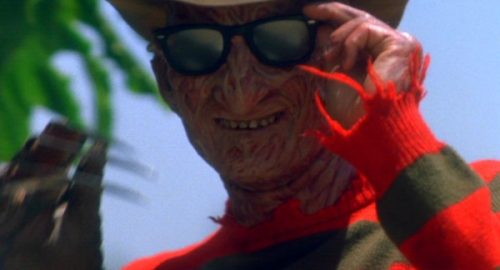 As with 3, there is so much scenes that stand out in my mind with picture clarity, the Junkyard scene, the water bed scene, the beach scene, the classroom scene, the elevator scene, the movie theater, Freddy eating the Pizza, Alice and Dan spinning through the tunnel, Roach motel scene, Freddy’s death (my fav in the series, it’s the work of genius Steve Johnson), all classic scenes and after watching them you can see why the movie made the most money in the entire series (ex Freddy Vs Jason).

Some flaws I have with the movie are 1) Although the deaths had good SFX, the gore and mean streak so prominent in previous sequels was seriously lacking (ok Debby’s ROACH DEATH IS ONE FOR THE BLOODY BOOKS!), Should have made Freddy mean like part 3 did, 2) the movie’s narrative gets a little shaky in places, making some dream sequences not following up with proper timeline in the “real world”, comes off as a tad distracting(I still don’t fully grasp Dan and Alice meeting up and crashing the truck?!?), and 3) the movie does get a little heavy handed making some scenes very cheesy (you’ll probably groan) like Alice gearing up to go into hand and hand combat. Too much man, I ended up laughing at it. 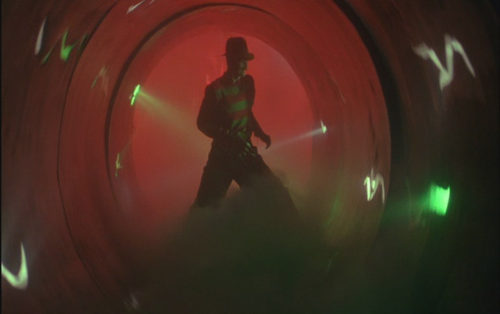 Overall though, this is the last decent hurrah for Freddy. The movie sells his soul but at least it’s still quite fun watching it go down, swinging. It only gets lesser and lesser after this one, and Robert Englund has even admitted in some interviews that he felt strongly about this movie ending the series, as Freddy’s death certainly gives him his just desserts in spades and is a fitting touch. What a kick ass scene too. This is where Elm street ends for me, even though I still watch 5, I consider this to be Freddy’s final “adventure”.

Of course, commercialism and the mighty buck thought otherwise, but you can still consider this the final Freddy, and should wisely do so. (Until New Nightmare that is, but I consider that more of a stand alone despite referring to it as part “7”). 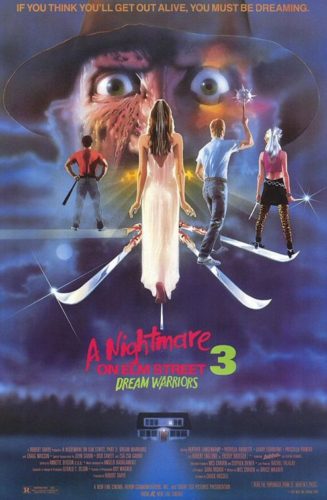 There is nothing that I love better than seeing a really cheesy ad promoting one of my favorite slashers from the 1980’s. A wave of nostalgia rushes over me as I sit there grinning from ear to ear. Just hearing the cheesy narrator describe how amazing the slasher movie is going to be gives me goosbumps. The following is one of my ultimate favorites. Robert Englund as Freddy Krueger describing to video store owners just how many copies “Nightmare on Elm Street 3: Dream Warriors” is going to sell and just what is in store for Nightmare 4. Plus a chance to win a movie role in Nightmare 4?!? Sign me up!