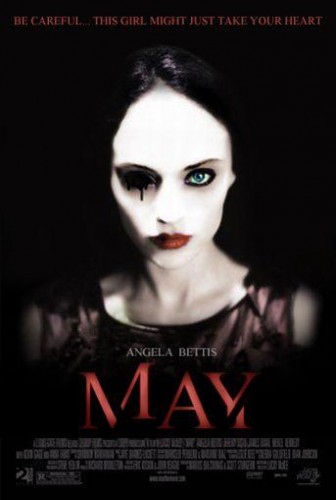 May (played by the extremely talented and underrated Angela Bettis) is lonely. She works at an animal clinic and lives all alone in her apartment with her only friend, Susie, a doll in a glass case she’s had since she was a little girl. Although they’ve been friends forever, May wants a ‘real’ friend, someone she can hold. She gets some hope when she meets Adam (Jeremy Sisto), a cute mechanic with beautiful hands who may be able to accept her for who she is. However, she slowly starts to realize the more you get to know a person, the more parts you find that you don’t like…

This is the premise for the twisted directorial debut of the great Lucky McKee, a film that tackles horror, drama and pitch black comedy perfectly. Not a typical horror-comedy like RETURN OF THE LIVING DEAD or EVIL DEAD II, but definitely something that manages to repulse you, scare you and make you laugh. Well, it’s definitely not a type of humor everyone could get into. It’s much more of an uncomfortable humor, something that might make you question how sick you really are, and something that would definitely offend others. Even while we’re sympathizing with a lonely woman slowly going insane when she realizes she may never fit in with humanity, doing sick things that make us question if we even should sympathize with her, it’s hard not to laugh at the film’s wonderfully insane sense of humor. Even as an animal lover, seeing a guy freaking out over coming home to find his dog randomly missing a leg is laugh-out-loud material, along with May grossing Adam out with some messed up work stories that she giggles like a little school girl over. The great Anna Faris adds more humor to the film as the hilariously ditzy and horny-as-hell lesbian.

Now, as I said, this isn’t a typical horror-comedy (or is it comedy-horror?). Lucky, along with his extremely talented cast and crew, know exactly how to get us invested in a character that attempts to come out of her shell and join humanity only to descend into horrifying insanity. He knows how to freak us out by pushing the envelope and showing us ugly situations that would make certain people walk out of the theater (the blind children and the broken glass, for example). But even with the FRANKENSTEIN-esque themes of loneliness and the failure to fit in with this world, the Polanski-like descent into madness and the sheer disgusting horror, it’s all shown in a thick coat of uncomfortable humor that makes it all much easier to sit through. One of my favorite films of all time, whether I look at it as horror, drama or comedy.