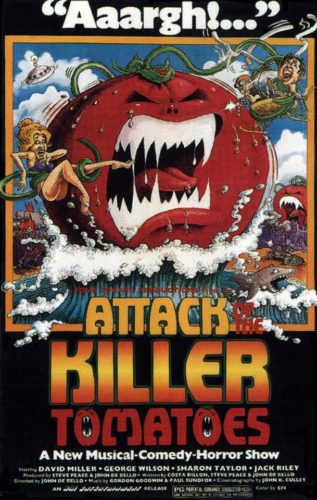 Tomatoes! Once nutricious friend to mankinds salads and french fries now threatens mankind! They rise from their gardens, their grocery stores, their fridges and window sills and launch an all-out war against mankind for using them as substance for centuries! Will humankind be able to make a stand against the tasty, acidic villains, or will life as we know it be reduced to so much rich, Italian paste?!

Attack of the Killer Tomatoes. John De Bello’s silly sendup of 50’s sci-fi horror films remains a true one-of-a-kind. A shoestring low budget, amature cast, cheap special effects (safe for a real helicopter crash caught on camera by accident), corny puns, Jaws spoofs, silly dialogue, Matt Cameron’s squeaky singing voice, a man in a chicken suit, an erratic plot, 70’s San Diego, a ridiculous love story, and one uproarously funny theme song – what’s not to love in this bizarre little comedy? Certainly not for all tastes as anyone looking for seriousness should avoid this one. But, for the movie goer who can embrace a taste for absurd, if not outright stupid, humor – Attack of the Killer Tomatoes truly champions!