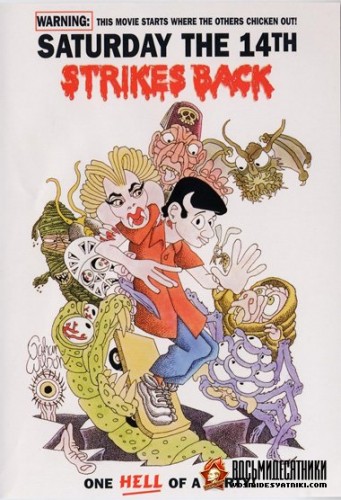 Saturday the 14th Strikes Back is a film made for people who laugh every damn time Lucy yanks the football away and Charlie Brown falls flat on his butt. Whether the film is attempting comedy, child-friendly monster mayhem, or basic exposition, it finds a way to fail disastrously.

The premise of Saturday the 14th Strikes Back, a sequel in name only, is simple enough. A family lives on top of a passageway to Hell. Creatures of all shapes and sizes pass through the crack and cause madcap tomfoolery for hero Eddie Baxter (Jason Presson) and his family. Eventually, Eddie is tossed an obligatory, unnecessary love interest and forced to battle the very essence of Evil for his family and for humanity as we know it.

Aimed at children, the movie unfolds like a series of skits meant to provide safe, non-menacing monsters mixed with Airplane! style hijinks. In these small moments, Saturday the 14th Strikes Back embarrasses itself repeatedly, like a dog that can’t stop whizzing on the rug.

One gag involves hero Eddie Baxter lamenting his family doesn’t eat normal food as his mom fills his breakfast plate with sugary desserts. It’s not long after that when a scantily clad vampire appears in his bedroom to sing a doo-wop song about being bored with a vampire’s diet. The gags keep coming: the submarine in Eddie’s uncle’s stomach, the pudding sculptures, the monsters on the miniature golf course, the brain burgers, and the cop-out stock footage battle with Evil that ends the whole mess. Each of these moments takes something that barely qualifies as humorous and awkwardly beats each joke like a dead horse. In fact, one of those jokes literally involves dead horses.

The first five minutes of the film say everything. The credits roll over a calm, peaceful beach. The music, as if from another movie, bleats scary horn bursts as nothing more frightening than waves lapping at the sand appears on the screen. Eddie Baxter stumbles through clunky dialogue and, when the camera finally focuses on him, he looks straight into it and tells us this was the summer where he saved the world.

This is a zero Teddy film, but few films are as entertaining as watching this movie try to be clever and fail. It’s simply that earnest and determined, and pity makes belly laughs deeper. Like a kid in socks trying to turn a corner on linoleum, like a drunken man hitting on a waitress, there is humor in watching repeated clumsy failure. For this, Saturday the 14th Strikes Back should be saluted.