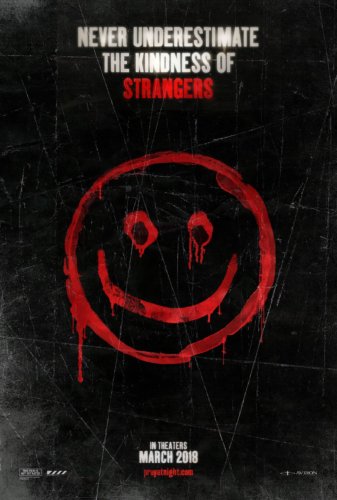 A family stays the night in rental trailer park that is seemingly abandoned. Itâ€™s not too long after they arrive that they get a knock at the door, and from there the three masked killers from the first make this family their next targets. Now the family must fight to survive.

After being in purgatory ever since the original film came out, 10 years later the sequel has been released. I was very skeptical about this, especially feeling like the original has lost its effect through time. Thankfully, I was massively surprised with this follow-up. Was it a sequel we absolutely needed, let alone 10 years later? Not really. But it sure as hell is a sequel that is surprisingly fantastic. What I think makes this sequel so great is that it could easily stand on its own. This follows a completely different beat and tone than the original. The original was a slow burn home invasion film, and this one is a suspenseful slasher film. And as a slasher, it is one of the most fun and suspenseful slashers Iâ€™ve seen in a very long time. The first act follows the family and their pretty basic drama with their teenage daughter being angsty, the son being in his own world, etc. Thankfully this is blown through really quick and we finally get to the horror. Once the horror kicks in it grabs you and never lets go.

Despite his first film The Other Side of the Door being a pretty terrible film, director Johannes Roberts has since impressed the hell out of me with 47 Meters Down, and now this film. With these two films, Roberts has proved to have a master touch of building suspense and perfectly timing some great jump scares. He also uses the entire trailer park to his advantage and making you feel as lost as the characters. What also helps deliver the suspense is the fantastic score and the soundtrack. Who would have thought 80s pop songs could be used so well to build suspense? The filmâ€™s score, along with its overall tone does really well of giving it a retro feel without being too on the nose about it. Not only this, but the film also features some pretty great nods to other horror films, and Roberts nails them too without coming off as rip-offs. Finally, the Strangers are more deadly and vicious than ever, so when our protagonists get the upper-hand on the villains you are hardcore cheering them on. The whole cast does a fine job, but itâ€™s our sibling leads in Bailee Madison and Lewis Pullman that sell the movie. On their own their performances are solid, but together you love seeing them together with their bond. And these are characters who actually fight back despite being in fear for their lives, but even out of fear they donâ€™t make very many stupid decisions, but when they do something violent, they are effected by this instead of acting super human about it. The siblings were actually fairly realistic in how they were written and portrayed, I could easily imagine this is how real people would react.

The Strangers: Prey At Night is a sequel you may not have wanted or needed, but itâ€™s a sequel that surprised the hell out of me. Thinking about it now, itâ€™s actually a very satisfactory follow-up and one I think we actually deserve by having characters actually fighting back. It may have a groan-worthy first act, but it doesnâ€™t overstay its welcome before the horror begins and from there itâ€™s a fun slasher thrill-ride.