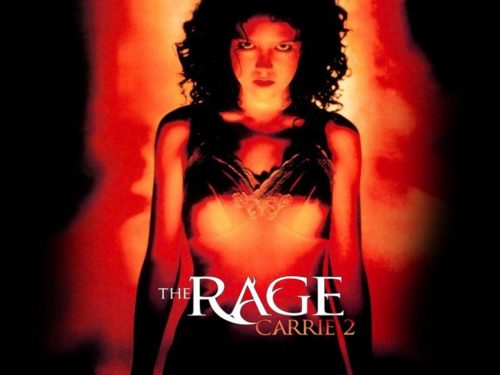 CARRIE never needed a sequel, it didn’t even ask for one, but it was bound to happen someday. Kevin Williamson reinvented the slasher genre in 1996 with SCREAM, prompting new fans to go seek out the classics such as HALLOWEEN, which lead to Jamie Lee Curtis going to Kevin with the idea of popular heroine Laurie returning two decades later in HALLOWEEN H20. I think this might have something to do with the idea to make a follow up to the 1976 horror classic about an outcast teenage girl getting revenge on the town that tormented her, and having her only survivor Sue (Amy Irving) return to better connect the two films. A sequel that was not exactly well received by fans of the original.

THE RAGE starts off with little girl, Rachel (Emily Bergl), being put into foster care after her crazy religious mother (J. Smith-Cameron) is placed in a psychiatric hospital. It’s clear from the very beginning that she has the power to move things with her mind, but doesn’t understand it. Years later, we meet her as a teenager. She’s a bit of an outcast, with only one real friend, Lisa (Mena Suvari), a dog she’s had since she was little, and a pair of foster parents who don’t really care about her. When Lisa kills herself after losing her virginity, Rachel starts to uncover a dirty little secret involving the entire high school football team, a game they play to seduce girls and dump them for points while keeping score in a little notebook. While she starts a romance with Jesse (Jason London), the most sensitive and down to earth of the boys, the others target Rachel to make sure she keeps her mouth shut. After realizing Jesse is seriously falling for Rachel, they decide to make peace and invite Rachel to the big party after the big game, but they’re secretly planning the ultimate prank to humiliate Rachel and tear the young lovers apart. Meanwhile, guidance counselor Sue tries to help Rachel come to terms with her friend’s suicide, her mentally unstable mother and her own powers, which Sue has seen before during a tragedy that happened in the town over twenty years ago. And she’s afraid history will repeat itself.

The fact that it took me so long to explain the basic plot might have something to do with why this film is so unpopular, there seems to be so much going on but I think it works. I also think the main reason it’s so hated is because it’s the sequel to a very popular film with such a sympathetic main character, that no one wants to see a sequel about someone else. This is precisely why I like it, it shows us someone who is very different from Carrie but with some of the same problems. Rachel is not a victim, she’s not abused at home, she has at least one friend, and she doesn’t seem to be humiliated so much at school as much as ignored. At least until people start to feel threatened by her. She also has hobbies, interests and a job, things that Carrie was never allowed. Another big difference is how she views her powers… Carrie immediately reads about them and is aware of what they are, whereas Rachel fears for her sanity, and is afraid she’s just crazy like her mother.

This film, like the original, is a good drama that explodes into an intense horror film in the final 20-30 minutes. The love story is very nicely done, and you actually care about these characters. Rachel and Jesse have lots of chemistry and you want to just interfere and tell the ‘bad guys’ to just let them be. I also enjoyed the return of Sue, who is obviously still very shaken up by what happened all those years ago. She’s become a guidance counselor to help other girls like Carrie, still feeling guilty over the tragedy that left several of her peers, including her boyfriend, dead. Perhaps she comes on a little too strong, and a little too desperate, pushing Rachel even farther over the edge. But honestly, after what Sue went through, should we expect her to be 100% stable? The best thing about this subplot is a scene where we return to the remains of the original high school, with lots of flashbacks to the original massacre. Apparently you even see the bucket which was once filled with pigs blood, although I could never spot it. Amy Irving does great as the much older and less stable Sue, and she was a welcome addition and a nice anchor to the original film. Katt Shea does great behind the camera, I especially love when it switches to black & white when Rachel is using her powers, and both the suicide scene and the love scene were beautifully done. She’s a very underrated director. Also, the climax is great bloody fun, while not as powerful and not built up as well as that in the original, the party massacre has lots of fun death scenes and gore effects.

Now this film is certainly not perfect, the drama is not nearly as gripping as it was in the original, the ‘villains’ are very one-dimensional and not as fun to watch as, say, Nancy Allen and John Travolta and the ending feels a bit rushed. Most of these flaws come from comparing this film too much to the original, and it really works more as a modern retelling. The best thing about this is our main character, Rachel, played by a very sympathetic Emily Bergl, and her ‘Romeo & Juliet’-esque love story with Jesse. Watch it as a teen drama that explodes into a bloody horror film and you shouldn’t be disappointed.

To buy from Amazon: The Rage: Carrie 2