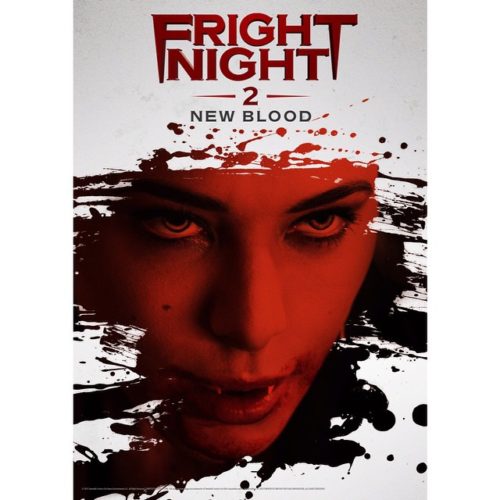 On Monday I watched Fright Night 2: New Blood (2013) for the first time. This was the latest DVD screener I received from my job to review. This movie has gone straight-to-DVD pretty much everywhere. My expectations were pretty low to begin with. I have seen Fright Night 2: New Blood and let me begin by telling you that this movie is another remake of the 1985 original, but unfairly disguised as a direct sequel.

As for the movie, Fright Night 2: New Blood is a very decent entry in the horror genre. The story is unoriginal and the ending is predictable. If you’ve seen any Fright Night movie before, you can already guess the ending from miles away. Admitted, the story has one interesting aspect to it that hasn’t been done before and that would be the Elizabeth BÃ¡thory legend, I wish they did a little bit more with that aspect. The acting performances are weak, some of the characters were really annoying. I could only care for the main actor Will Payne who played Charley Brewster as he was pretty likeable. The make-up effects are surprisingly solid and there is a fair amount of blood and gore in this movie. The directing wasn’t bad either, especially for a direct-to-video title. There is also a fair share of humor in this, but some of the jokes feel kind of pushed. Fright Night 2: New Blood is overall extremely pointless and unnecessary as it doesn’t add up much to what we’ve seen in the Fright Night remake of 2011, which I actually much prefer over this…

If you’re a fan of the Fright Night movies you might enjoy this for what it is, but for newcomers: stay FAR away! And don’t let the misleading title fool you, this movie is nothing but a less than underwhelming repeat of what has been done MUCH better in the past. As of right now, the Fright Night franchise is dead in the water if you ask me. The hatchet should’ve been buried after the 2011 remake, as this latest outing is nothing more than a double obvious cash grab.