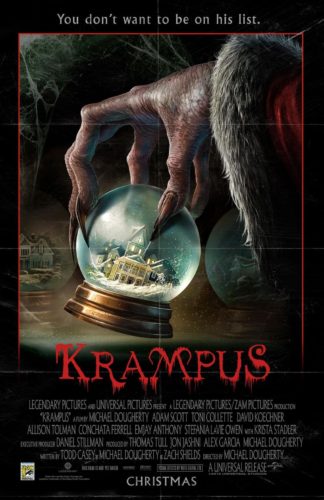 With Christmas Day approaching, families are bustling through stores trying to find presents for their loved ones, Santaâ€™s are at shopping malls, and all is jolly. However, for one young boy, everything he once believed about Christmas comes crashing down. When his family gets together, there is instant fighting. This is when young Max loses his faith in Christmas, declaring his hate for it, and his family. With that begins a night of terror for the family as they must now fight together against a sinister presence named Krampus, who appears with his helpers and wreaks havoc on the family, hoping to drag them to the underworld.

During this time of year, we get films that are light-hearted and feel good, or hard-core dramatic films fighting for an Oscar nominee. Krampus sets itself apart far from them. The last horror Christmas film to be released was the Black Christmas remake in 2006. Which was a huge flop. What I can saw about Krampus is that itâ€™s easily my favorite Christmas horror film following the original Black Christmas. In all honesty, there are quite a few things that Krampus succeeds better on that Black Christmas. It gives a solid horror story, but giving us plenty of fun to go with along the way. It has a perfect blend of suspense and comedy. One particular scene involving the teenage daughter encountering Krampus, I will admit had on edge. Some scenes were in the trailer, but that does not hurt the scene in the least. It has such a great build up, and the atmosphere and cinematography just add so much to it. In general, Krampus has such beautiful and creepy cinematography. It also doesnâ€™t feature an over abundance of jump scares. Like the scene with the teenage daughter, the big scene in this attic is intense with everything that is going on in it. Besides the cinematography and suspense, it has some great comical moments, and part of it is because you can honestly feel how real this family is and compare them to some of your own family members. This can be whether itâ€™s the dialogue or just the mannerisms. The biggest thing is that it very much captures the Christmas season that very few Christmas comedies fail to capture. And it doesnâ€™t sugar coat it to be all happy, it captures just how much Christmas has changed in society.

The story is extremely fun and thrilling and the characters and the world they live in is super relatable, and it gives us a new Christmas icon to embrace during the season. With that said, there were some things that disappointed me. The overall look of Krampus is pretty damn freaky. His first appearance in the film is all in the form of a silhouette as heâ€™s leaping from house to house to chase after a character. It was the perfect way to introduce him. When we finally see him up close, itâ€™s not as terrifying as it was with just his figure, but heâ€™s still not someone Iâ€™d want to come across. Which brings me to my point of having Krampus doing very little in the film. His â€œhelpersâ€ do all the work and killing for him. Some of his helpers are creepy, and some are just used for goofy laughs, and they work, but as a viewer I wanted much more of Krampus causing mayhem than his helpers. While I will admit, the PG-13 rating is forgivable for the most part, but at the same time, it could have done so much more with an R rating and made it much darker than it already was, especially when all the deaths were off-screen, but I will say I was surprised by the order of which certain characters lived/died. Finally, the ending I felt went on five minutes too long. It had the perfect opportunity to end on a super dark note, but then it goes to an ending that essentially blends the two. That is just not okay with me. You canâ€™t blend a happy ending and a dark ending. Worst part is, the happiness overshadows the darkness of it. But despite this, it doesnâ€™t hurt the overall film too badly.

Finally, there is the fantastic performances by the cast. As I mentioned above, each character is super realistic and believable. We have the husband wife hosting, just trying to hold themselves together despite the bitterness they have towards the visiting family members, the family members who insist on criticizing everything the host family is doing wrong in their eyes, the cousins who insist on humiliating you, and the aunt who hits the alcohol right away, and the sweet grandma who just wants peace. Everyone in the cast nails these roles. Adam Scott and Conchata Ferrell give easily the most comedic performances, especially Conchata who has the best one-liners. But if I had to pick who gave the best performances overall it would be Allison Tolman as Toni Colletteâ€™s visiting sister. Of everyone, she ends up being the most rounded character. She plays two different aspects of the character to perfection. We see her as the nagging sister, but then we see her change into someone with a deep concern for her family. Krista Stadler also brings in a strong performance as the grandmother you fall in love with instantly. She plays the role with such heart and earnestness and doesnâ€™t overkill it.