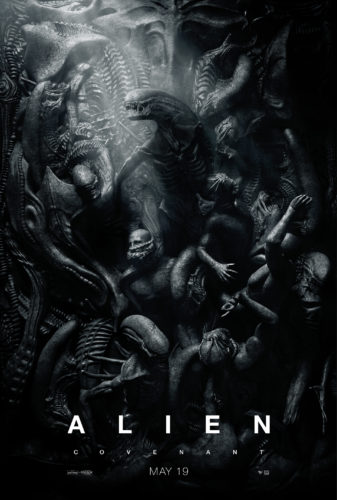 A ship carrying thousands of colonials is on its way to a new planet for them to inhabit veers off course after receiving a strange signal. They discover a new planet that appears already inhabited but also devoid of life. When they uncover the truth of this planet they find their lives in great danger.

Let me start off by saying that I personally really liked the predecessor to this film Prometheus. Many hated it because it wasnâ€™t â€œAlien enough.â€ I can understand this. But after seeing Alien: Covenant, it made me like Prometheus a whole lot more. If anyone who hated Prometheus sees this movie and says itâ€™s better, I will be truly baffled. The trailer for this movie made it seems like this would be a true Alien film. Not the case at all. Yes we have our beloved Xenomophs and our new aliens called the Neomorphs. The Neomoprhs have a mere 7 minutes of screentime in just the one sitting half way through the film. And itâ€™s only an hour and half into the movie when we get any Alien-related action. And even then itâ€™s not used in a treating way because itâ€™s so fast-paced. That right there mostly sums up the only good part of the movie. The whole first hour and half goes by so slowly and itâ€™s beyond boring with its pointless philosophical exposition. Prometheus had this, sure, but it also used it sparingly and had itâ€™s thrilling moments in between.

By the time we get to good Alien stuff, as mentioned, itâ€™s too rushed to really enjoy and bask in. All of the good horror stuff you see in the trailer doesnâ€™t happen until within the last half hour of the movie. Apart from the boring exposition we are stuck with the most uninteresting and boring characters ever, and the character who show the smallest bit of personality are left behind on the ship while the others explore the area, and one dies early on. If we are supposed to see Katherine Waterston as a Ripley type character, thatâ€™s a huge joke, her character is so boring and pathetic, and all Waterston does is walk around moping because her husband (a pointless cameo by James Franco) dies right when we meet these characters, and gets even more mopey when she doesnâ€™t get her or no one listens to her. Apart from Waterston, the acting by the rest of the cast is decent for the most part. The more stronger performances come from Michael Fassbender playing dual roles as the returning character David from Prometheus, and the new cyborg Walter. Billy Crudup plays the shipâ€™s captain, and while Crudup does fine with the role as the tortured captain who is trying to do whatâ€™s best for his crew (failing miserably), he could have upped the emotional level a bit. Carmen Ejogo also turns in one of the stronger performances (and also was my personal favorite character) as Crudupâ€™s wife. Sheâ€™s essentially the brainy scientist of the crew and acts as Crudupâ€™s moral compass, and she really is the only moralistic one who puts her life on the line to help others. Danny McBride is worth noting here, although I wasnâ€™t crazy about the performance, but for his first major serious role he does pretty good here, but he also doesnâ€™t get enough to do.

Covenant also suffers from some of the most awkward scenes ever created. One featuring David teaching Walter how to play a handmade flute (featuring even more awkward dialogue involving fingering, holes, and blowing), the other scene involving a kiss between the two Fassbenders, and just a pointless and out of place shower half-sex scene. The whole movie just has some pretty bad dialogue. In all honesty, the only interesting moments involve David recalling the events between Prometheus and Covenant, and the small amount of Alien action we do get. And I wonâ€™t give anything away, but we find out the creation of the Xenomorphs, and quite frankly, it sucks, and makes you wish they had never even bothered to share this information. Sadly this (for me) is the worst entry in the series. But while I didnâ€™t like it at all, there some things I did like. I noted the certain performances and characters, and the alien stuff, but there is also the (as per usual) gorgeous cinematography and some great set pieces.

Alien: Covenant really just suffers from a terrible script. Itâ€™s all over the place and has no real direction of what itâ€™s trying to be. It tries and fails poorly to be a Prometheus sequel and an Alien prequel. And quite frankly this had no business using Alien in the title because there isnâ€™t nothing Alien about this in tone or feel, and the small and rushed bit of Alien stuff we get isnâ€™t satisfying enough. Prometheus at least didnâ€™t try to be anything it wasnâ€™t unlike this movie. Had there been Xeno and alien action sprinkled throughout as the trailers seemed to imply this could have been much better than it actually was.