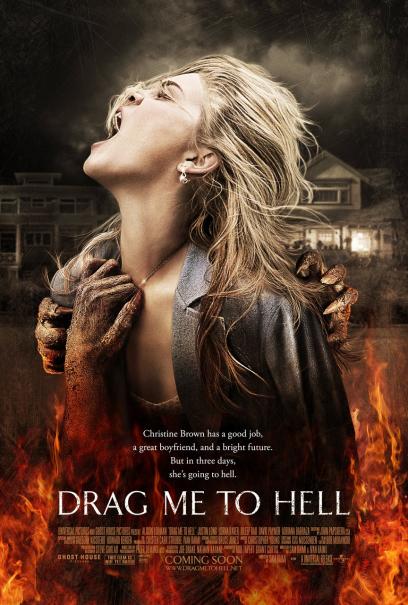 Welcome to our very first installment of Horror Re-Views here at Slasher Studios. The purpose of this new feature is to take a look at a horror movie in which we either loved or hated and see if we still have the same emotions on a rewatch. Today we will be look at Sam Raimi’s “Drag Me to Hell.” Although the film received rave reviews from critics (over 90% on Rotten Tomatoes), the film never seemed to find an audience barely making its $40 million budget back at the box office. Now, three and a half years after its initial release..how does the film hold up? Two years ago, I gave the film a perfect 4 Teddyhead score. Will I love it as much now?

From my original review: How this film was granted a PG-13 Iâ€™ll never know. A waterfall of a nosebleed, gooey dentures, dancing goats, maggotsâ€¦if you can imagine it, itâ€™s here. The film works as a social satire (the death of the middle and lower classes) and as a horror/comedy (the ritual at the end has to be seen to be believed). The performances are top natch and the ending is quite ballsy in its conviction (youâ€™ll see it coming a mile away but will be surprised they actually follow through on it). Overall though, if you love movies like â€œThe Evil Deadâ€, â€œArmy of Darknessâ€, or â€œCabin Feverâ€, itâ€™s a must watch. It is one of the best horror films of 2009.

Re-watch: One thing remains the same about “Drag Me to Hell,” I love the atmosphere and I love the mood of the film. From the opening old school Universal logo to the gothic settings, the film looks spectacular with some of the best cinematography I’ve ever seen. What doesn’t work so well is the mixing of horror and comedy. On my initial viewing, I discussed how much I loved the ritual scene involving the “man-goat” and how hilarious I thought it was.

In the re-watch, I lightly chuckled but felt as if it were at bit too on-the-nose. Horror-comedies that know they are funny don’t usually succeed and this one definitely tries to have its bloody cake and eat it too. What also doesn’t work is the PG-13 rating. In my original review, I stated how I thought this was the bloodiest PG-13 rated film that I had ever seen. In the rewatch, I still felt that way but felt as though the film could have used a little bit more. I felt too often the film was holding back.

That said, I love Sam Raimi and my love for him makes me really like this film. As I originally stated, I remember staying up late at night as a child watching the original â€œEvil Deadâ€ through the corners of my fingers. It scared the hell out of me but, at the same time, there was something genuinely gratuitously amazing about the film. It was bold, bloody, filled with puss and maggots, and gore. It was incredible. If the nine year old me at the time could have married anything, it would have been “The Evil Dead.” If he were to return to the horror genre, Drag Me to Hell was a fine choice but I no longer love this movie as I originally did. It’s a good horror movie with some flaws but a hell of a great look.