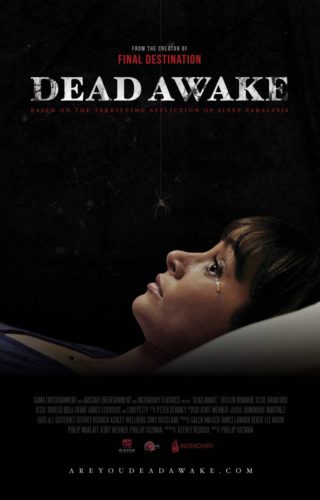 A young woman experiencing sleep paralysis begins to realize thereâ€™s more to fear than just the instances themselves. After her twin sister is killed during her sleep paralysis, she discovers a demon that kills its victim while in their paralytic state. Now itâ€™s up to her to find out more about this demon and how to stop it from coming after more people she loves.

Dead Awake is actually pretty damn good horror film that managed to keep my attention all the way through. The concept of sleep paralysis has interested me a lot ever since the documentary The Nightmare covered it. I personally didnâ€™t care for The Nightmare that much, so I was excited that there was finally a horror movie coming out covering the topic. I havenâ€™t experienced this state personally, but itâ€™s always represented as a pretty horrific one. Both The Nightmare and Dead Awake make this experience something I donâ€™t want to encounter. In this movie it does deal with sleep paralysis, but much of the story is very reminiscent of Nightmare on Elm Street, more so the remake. It deals with people dying in their sleep after being killed by a demon that haunts them, we have a character who is trying to find out about said demon, characters who refuse to sleep because of this (some going crazy), and the concept of â€œif you believe it, it gets strongerâ€. While these similarities are striking, it does a good job of being itâ€™s own story. Itâ€™s not a great movie by any means, but itâ€™s one that I highly recommend. If the concept of sleep paralysis interests you and you love horror movies (especially of this caliber) then you may enjoy it. The imagery in their dream states is actually pretty haunting, and the demon at the center of it all is pretty creepy, but also looks similar to most human-looking demons/ghosts we see in horror. We also have a great lead character played by Jocelin Donahue (who does a great job as always).

What I liked about Donahueâ€™s character is that she is clearly afraid of whatâ€™s happening to her, but sheâ€™s willing to keep putting herself in these situations in order to try defeat the demon in order to save those around her. Jesse Bradford does a decent enough job as brother of the dead sister. The character himself is your basic sidekick male lead, but heâ€™s also painted as the tortured artist/painter (even the long and full grown beard to make him look like Charles Manson). Lori Petty has a cameo as the â€œprofessionalâ€ Donahueâ€™s character seeks help from but keeps shutting down her claims about the demon. If we were supposed to really hate the character, then Petty does a great job of making us hate her. What I was disappointed about was the lack of Brea Grant. I really liked what we had of her, but I was hoping she would have had a bit more to do other than be the neglected housewife friend of Donahueâ€™s who also is experiencing these dream states. Dead Awake wonâ€™t go down as being memorable, but itâ€™s a good horror movie to relax and enjoy with its engaging concept and very creepy imagery.