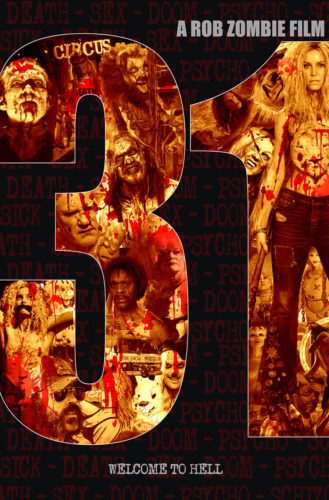 31 tells the story of a van-full of carnival workers who find themselves ambushed and eventually locked in a house of horrors on Halloween night. The group discovers that they are now part of an annual game called 31. The object of the game is to survive twelve hours against a group of maniacal killers.

I personally really love Rob Zombie as a horror director. He may not join the ranks of geniuses like Carpenter, Craven, or Hitchcock, but Zombie is brilliant in his own way. Ever since his debut film House of 1000 Corpses, Zombie releases to horror fans a world from someone’s nightmare. They are brutal, sadistic, grimly-filmed, and an inside look of various forms of hell. 31 is a brilliant addition to Zombie’s filmography. I wasn’t the biggest fan of his previous film Lords of Salem, it was fine and had very strong points, but it was missing something that I loved about his other films. With 31, I feel this is his best film yet. It’s a slasher film that is brought to a new level. Think of it as Rob Zombie’s vision of The Hunger Games. And it’s brutal, terrifying, and intense. We are given characters that are similar to other characters from Rob’s other films, but in this one, they are actually likable. They’re not cursing at each other throughout the whole film. They know they need to stand as a team if they want to get out alive, and it sticks with that for the whole film. They’re not perfect goody-two-shoes, but they’re strong characters you root for. And much like his villains in House of 1000 Corpses and Devil’s Rejects, his villains are extremely likable too. They have their own personalities that give them character instead of just random killers roaming around. I couldn’t pick any of the villains that were my favorite, because they are all fantastic and rank right up there with the Firefly family.

Rob Zombie was quoted saying that this was his most brutal film to date. I’m assuming this must have been before all of the cuts he had to make to receive and R rating. The version I saw had a enjoyable amount of blood and carnage, but this was nowhere near as graphic or brutal as some of his previous films. A lot of the violence are done during shaky-cam or quick cuts. It’s enough for you to get your fix, but you can tell that they were edited. Hopefully we get his original cut on dvd/blu-ray. The film itself moves at a great pace and provides a great adrenaline rush during the killer attacks. Zombie uses his usual lighting and filming style to provide a grim and nightmarish vision into the world of these characters, beginning with a face-to-face opening with our lead psycho Doom-Head. It’s a Tarantino-esque moment that leaves the viewer completely uncomfortable, thanks to the amazing performance by Richard Brake.

It is unfortunate though that for all the adrenaline built up through the film and all the way to its final act, we are left with a very anti-climactic ending. You expect a big showdown, but you don’t get that. The movie comes to a screeching halt with no real resolution. The final scene is effective, but it left me as a viewer wanting more. Not in a sequel sense, but in the sense that the movie didn’t feel finished yet. Zombie keeps up the tradition of putting his wife Sheri Moon Zombie in his films, and I’ve always found Sheri a great actress in the horror genre, she even can show great emotion as indicated in Halloween. But here, Sheri displays her most fun and kick ass performance after Baby Firefly. She shares the screen with another strong female character played by Meg Foster. Both women display a great amount of strength in their characters, neither female comes off as weak or annoying or dumb like in most slashers. However, I’d be lying if I said there wasn’t anyone who gave a bad performance. Each actor hard-core delivered with their roles and really brought a personality to their characters.

If you are a fan of Rob Zombie’s past films, you will love 31. It is a disappointment that the film wasn’t as brutal as it could have been (screw you MPAA), and that the ending wasn’t as packed as the rest of the film, but it’s still a brutal, fun, and bloody slasher film that I definitely recommend.