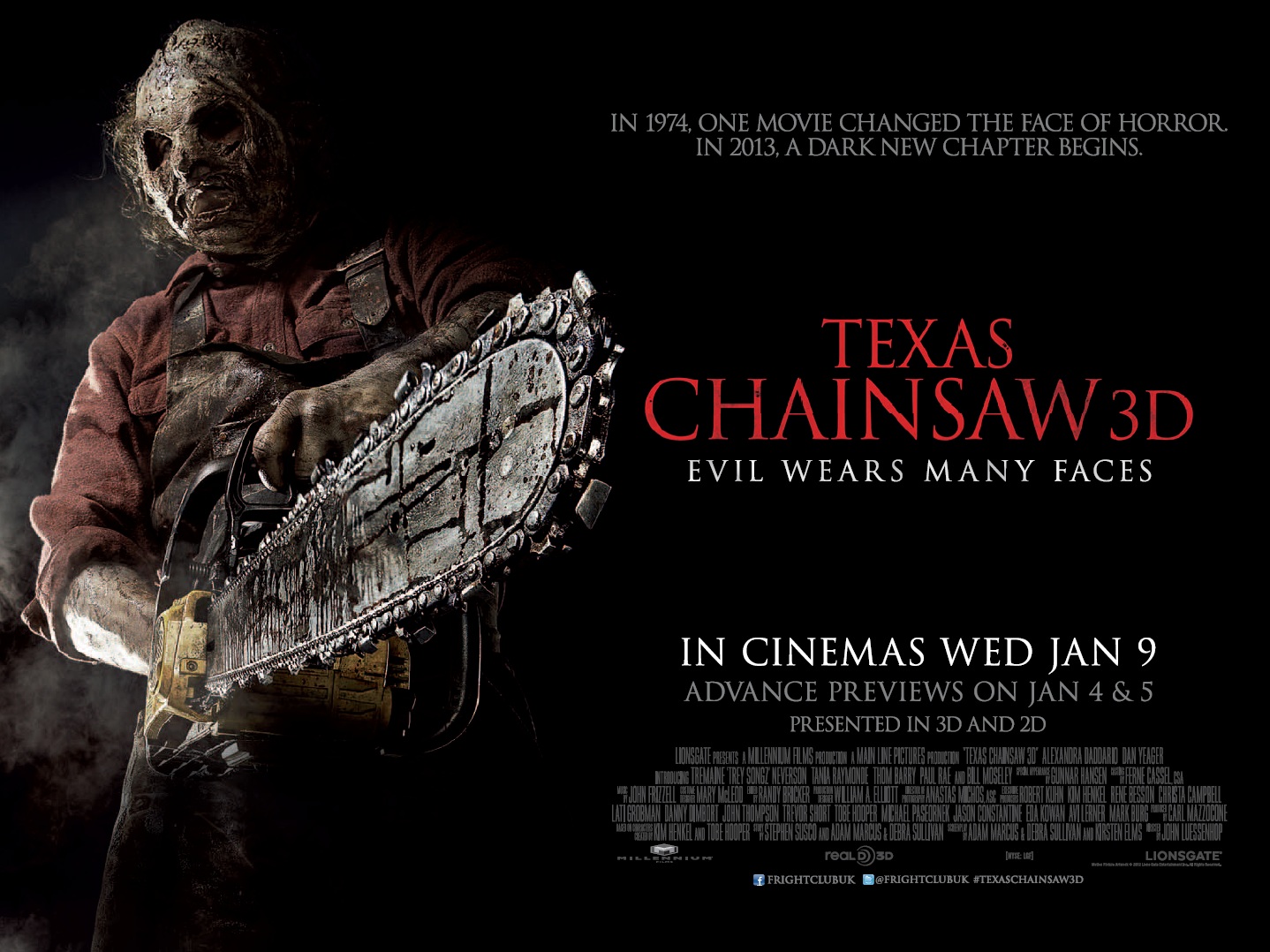 Before I begin this review, let me ask you a question. When was the last time you saw a horror movie released to theaters in the month of January that actually turned out to be good? The Devil Inside? White Noise? The Unborn? Well, if you answered any of those films, you and I have a serious difference of opinion on the word “good.” The one exception I will maybe give you is My Blood Valentine 3D. What is my point here? There is a reason why studios release horror films in January, 9 times out of 10 they are too awful to be released on the movie going public any other time of year. So, when today’s film, The Texas Chainsaw Massacre 3D, was moved from October 2012 to January 2013, all expectations for this film dropped. Did Lions gate realize they had a clunker on their hands or were they just afraid of the juggernaut known as Paranormal Activity? With low expectations but hopes high to see some bloody carnage on the silver screen yet again, I bought my ticket for The Texas Chainsaw Massacre 3D. What I got was something I wasn’t expecting, that’s for damn sure.

After we receive about five minutes of awesome flashback clips from the original slasher classic. The film begins the day after the events of the first film,. The townspeople of this small town decide to get some vigilantly justice on the infamous Sawyer family. Led by Mayor Burt Hartman (Paul Rae), they decide to burn down the farmhouse of the Sawyer family for their murders committed in the original film. After the fire, The entire family is assumed to be dead. But, being a horror film, we know this isn’t true. Turns out an infant, Edith Sawyer, is found by one of the townsman who takes the baby in with his wife to raise her as their own.

Twenty years later (or twenty some years later, the chronological continuity of this film is a bit on the wonky side), the infant has grown up to become a butcher with named Heather Mills (played by an appealing but far too trashy looking Alexandra Daddario). She receives news that her grandmother has died and she is needed to appear in person to accept her inheritance. With her boyfriend Ryan (a not terrible but not exactly good Trey Songz) and two other friends, Nikki (a slutty and altogether annoying Tania Raymonde) and Kenny (Keram Malicki-SÃ¡nchez) along for the ride, the foursome hit the road to Texas. They pick up a hitchhiker along the way named Darryl because they obviously have never seen the original OR the remake, otherwise they would know better that picking up a hitchhiker in movie with the any of the words Texas, Chainsaw, or Massacre in the title is a very bad idea. When they arrive in the town, Heather finds out that she has inherited her Grandmother’s house. Like does she know, Leatherface comes with the land.

The Texas Chainsaw Massacre 3D is a movie that can be evenly “sawed” in half between the good and the very, very bad. Daddario is easy on the eyes as our heroine Heather but she is stupid as hell and doesn’t seem to be smart enough to put anything together before the audience does. A late act reveal involving her character and another character is meant to be shocking but it is obvious from the moment we meet this person that they are nothing but trouble. Heather and her friends are stupid and honestly deserve to die. They make all of the typical horror movie mistakes. Let’s check out the basement! Let’s stop while running so the killer can catch up with me! But, as soon as..SPOILER ALERT: all of Heather’s friends die…the film becomes shockingly successful and the last act has a rush of adrenaline that is shockingly missing from the rest of the film.

When we are given the final twist (if you don’t get this at least a half an hour before it happens, you need to give up your horror card ASAP), I was rooting with Heather as well as the movie instead of passionately against it. Who knew that all Heather’s friends had to do was die in order for her to grow as a person and actually, shockingly, become likable. The deaths are hit-or-miss with a torso cut horizontally in half being the highlight and a terrible CGI death involving a meat grinder as the very low point. As bad as the first thirty minutes of this film are (the fire is laughably bad CGI from the early days of Nintendo 64), the last hour is definitely worth checking out. Don’t miss the final scene after the end credits. It is a gem of dark comedy that is missing from the rest of the film. In the end, this Massacre isn’t bad as it is forgettable. This blade definitely needs sharping.