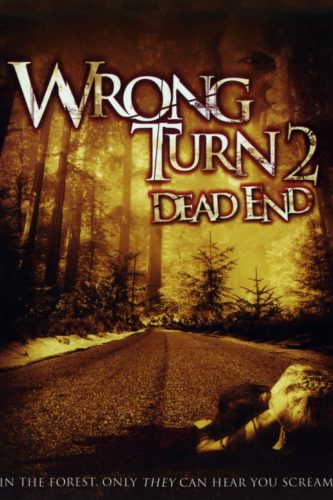 The original “Wrong Turn” was a surprise hit upon release in 2003. It featured Buffy The Vampire Slayerâ€™s Eliza Dushku and was a gory good time. In Wrong Turn 2, six semi celebrities take part in a survival reality show unknown to them that the reality is to survive! One-by-one they are being stalked by a creepy insane family of deformed cannibals as they have to learn the hard way that being on a reality show means putting on a show.

This 2008 sequel came actually as a very pleasant surprise to me as I was not expecting to like it nearly as much as I did. Although nowhere near the quality of the 2003 original, it still managed to completely shock me. Unlike the original, which was more tension then gore, this one takes on a new life of its own showing that horror has guts.

For the first act of this film, I wasnâ€™t all that impressed by it. However, after the first few kills I
realized that I was in for some fun. Getting near the end, the film took on a Texas Chainsaw Massacre tone with the dinner table scene which I actually found to be very creepy.

As much as I love the original, I can safely say I would happily watch this again! Wrong Turn 2 Dead End is a fun and gory slasher film that is not afraid to sicken the audience. The acting at first was subpar but as the film went on the acting was reasonable. In fact, for a low budget, direct to video sequel, the acting was actually decent. It was a nice thing to see and helped the film along.

Overall this was a fun film and I say go see it!