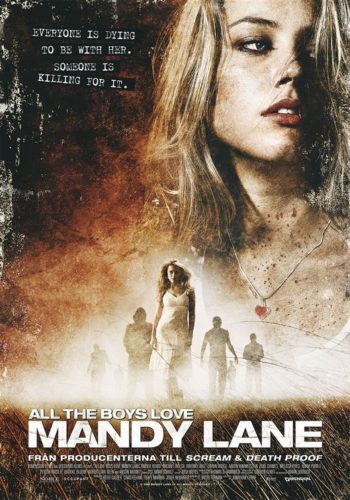 Let’s see…worst horror film…worst horror film…I could just post every horror film that appeared on MST3K (Werewolf being my personal favorite of the bunch), or anything from The Asylum, but that’s too easy. There are a lot of bad horror movies out there, but most of them are made by people who shouldn’t be behind or in front of the camera in the first place. Therefore, the worst horror films for me are the ones where there’s some obvious talent involved, but it’s completely wasted. With that in mind, my worst horror movie choice (always subject to change) is All The Boys Love Mandy Lane. My review:

When I finally got to check out the long-delayed (and still not available in the US) film All The Boys Love Mandy Lane, I thought maybe what I would get is a cool little horror film that I could enjoy from time to time. Considering all the hype surrounding it, I knew it wouldn’t be this decade’s “horror savior”, but I thought it could be pretty good.

Simply put, it’s not. Coming from someone who has really enjoyed some of the horror films put out since 2000, I thought this one was bad. REALLY bad. Let me break this one down a bit for ya:

The premise is good. No argument there. The idea of getting a bunch of guys together on a ranch with the girl they are ALL after could have made for some seriously good horror cinema. The problem is…nothing is done with it. All the guys trying to get with Mandy Lane are dumb as shit, and aside from talking about how they want to get with her, and occasionally flirting with her, nobody really does anything. The title of the film probably should have been “All The Boys Love Mandy Lane, But It’s Not That Big Of A Deal”. Maybe that was the point, but I don’t think so.

Moving on to the actual characters, they all are pretty bad, even Mandy Lane. I read in a review that the characters are more like real teens than the teens you seen in most horror movies. To this I say: Really? I mean, at this point we are used to the typical teenage characters, but aside from the black guy (who, for once in these movies, doesn’t act like a complete stereotype), these guys were as bland as slasher movie characters get, and cliche to boot. There’s the virgin (Mandy Lane, if you haven’t guessed), the jocks, the stoner guy (who thankfully isn’t as over-the-top as most characters of that kind), the bitches, and one guy who is there but really doesn’t have anything to do. For a film that’s supposed to be above average, it sure sunk to below average in terms of characters.

And was this a slasher film? I really couldn’t tell. People get stabbed and cut, sure, but for the most part people just got shot by the killer. I’m sorry, but using a shotgun in a SLASHER film doesn’t cut it. The suspense in a slasher film comes from the fact that the killer needs to physically get to you. When the killer can just blast you from a few feet away, suspense is the only thing that really gets killed.

Speaking of kills, there’s nothing really spectacular in this film. Spoiler: a girl getting a shotgun shoved through her head was probably the highlight. Sadly, it was also the first kill in the movie. I was thinking as I watched this that, if all else failed, I’d at least have some cool kills that I could talk about, but again, most of the people get shot in this film, so that’s already out.

What about the music and the look of the film? Well, if mostly shitty pop/rock songs and a look that’s been done better in a lot of other films is your thing, then you’d probably dig them. I didn’t, though. There was a bit of score music that I thought was good, but it was so underused that it didn’t really matter. They also went for a gritty, desaturated look, which works well in some horror films, but unfortunately in this film it made every shot look like it was from a video for a depressing country song.

So yeah, waste of a good idea, bad characters, no suspense, no good kills. Am I missing anything? Oh yeah, how about the ending? I mean, if the film ends pretty well, at least you’ve got that, right?

First off, we find out who the killer is about half way through the film. It just so happens to be Mandy Lane’s best friend, who she allegedly stopped being friends with after a freak pool accident near the beginning of the film. So yeah, I’ve already got problems with that. But this film isn’t done yet. Oh no. As the film nears the end, we come to find out that Mandy Lane is a psychotic bitch who is in love with the best friend now. So yeah, this film just went Natural Born Killers on us out of nowhere. But wait! There’s more! After all the stupid characters are dead, and our crazy-go-nuts lovers are about to off themselves, she turns on the best friend (like I said, she’s a psychotic bitch) and won’t kill herself. Then, he’s about to kill her, when a throwaway character from earlier in the film shoots the best friend (you just have to see it). The best friend isn’t dead, though, and goes Voorhees on said throwaway character with a machete (the character doesn’t die, though…um, what?). Mandy Lane goes running off, but falls into a pit with cow corpses in it. (There was a story about killing cows earlier in the film. I guess they thought they should throw in what happened to the bodies…whatever..) The best friend finds her, they yell and fight with each other in the corpse pit, then the best friend’s machete gets lodged in a piece of wood that she was going to hit him with, so she kills him with that (again, you just have to see it). Then Ms. Mandy Lane walks back to the throwaway character (who is unaware of her involvement in the murders for some reason), puts him into a Jeep, and they drive off. Roll some earlier footage of all the teens being happy, and a shot of innocent Mandy Lane that turns red. Cut to credits.

Excuse me while I borrow your barf bag.

So yeah, the ending was definitely the shit icing on the crap cake that was All The Boys Love Mandy Lane. I’m sure there are other, more incompetent films out there that would make better candidates for “Worst Horror Film”, but this one actually had the potential to be good, and that’s a lot more aggravating to me.