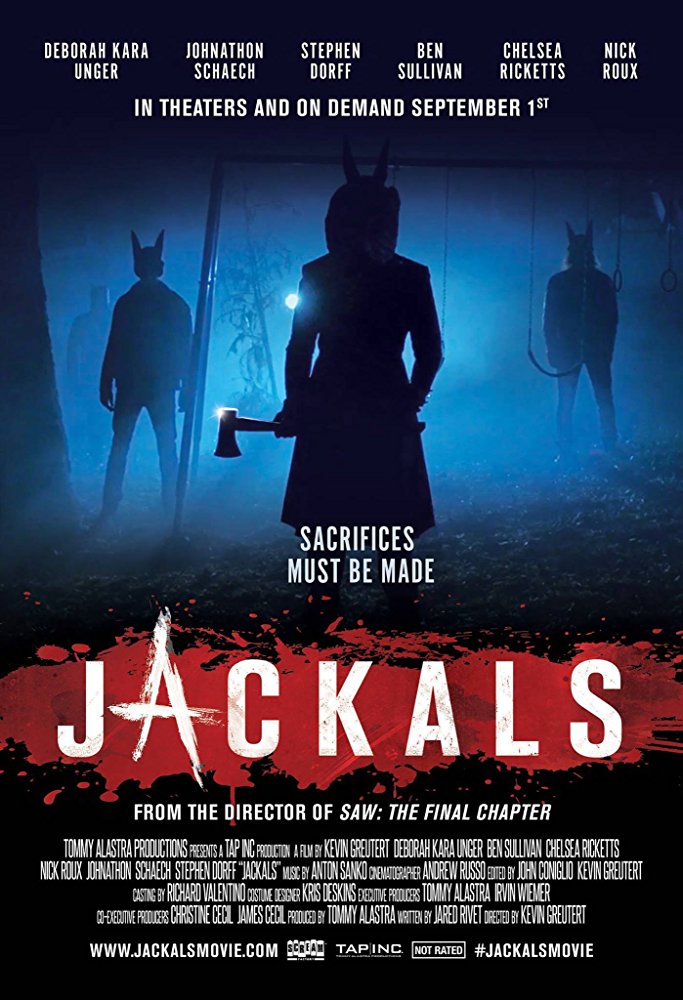 When a separated couple hires a man to basically kidnap their son from a deadly cult they bring him back to the family cabin in order for the man to try snap the son out of his brainwash. As the night goes on and the son doesnâ€™t seem to change, mysterious figures in animals masks turn up to try get the son back by any means necessary.

Jackals has the makings of what could have been a great and chilling horror film. It has the story for it, the perfect setting, a creepy cult, and occasional creepy moments. Unfortunately this is sordid most especially by the fact that we have some of the dumbest characters Iâ€™ve seen in a horror movie in a while, along with some extremely bad acting. The first half of the movie is really good with the family trying to almost â€œexorcizeâ€ their son. In fact it was the most interesting part, the behavior of the son was horrific enough to still make the film creepy and chilling. Once the cult shows up is when it begins to become predictable and repetitive. Had the cult stuff been saved for maybe the last twenty minutes or so, the film could have worked much better. Instead itâ€™s nothing but the family looking out the window, the cult trying to break in and failing, and many images of the cult just standing outside, and of course the characters making extremely stupid decisions. The first stupid decision made leads to what was probably supposed to be shock value, but right when the character did this itâ€™s extremely predictable what was going to happen. And then of course the film ends just way too conveniently and a little unsure of even how they wanted to end it. Itâ€™s then tacked on with a clichÃ©d final shot. I do have to mention though that I absolutely loved the opening sequence. While it was clearly playing a homage to the opening of Halloween it was still really creepy and initially I thought this was a sign of what was to come, unfortunately it wasnâ€™t.

As mentioned, the characters are unlikable, but I feel like this is because most of the acting was pretty terrible. Deborah Kara Unger and Johnathon Schaech play the parents of their son Justin (played by Ben Sullivan). Unger and Schaechâ€™s performances are just dull and lifeless, even in the scenes meant to be heartfelt. Though Schaech does fine when he has to be angry and pissed off. Unger just seems like sheâ€™s stoned the whole time, like every other performance sheâ€™s done. Chelsea Ricketts plays Justinâ€™s ex-wife and mother of his child with just as much lack of emotion, but she at least seems to be trying. Nick Roux does fine with his role as Justinâ€™s brother, but this is kind of overruled by the fact that the character is terribly written. Itâ€™s unclear whether he even cares about his brother, and comes off as bipolar. Stephen Dorff isnâ€™t terrible in his role as the man helping the family get their son back, but he also doesnâ€™t get a whole lot to do either, and is amongst one of the stupid characters. But of the whole cast, the only one who does turn in an all out good, probably great performance, is Ben Sullivan as Justin. There are times where he does come off a incredible creepy from how he lashes out at the family, to the creepy looks he gives. He even does a good job of pulling off ambiguity as to whether heâ€™s faking out the characters to release him or if the old Justin is coming back.

Jackals is honestly a film I canâ€™t recommend, despite a great opening, setting, a good first part, and a great performance from Sullivan, there is just so much to be frustrated with in terms of characters, acting, and the constant repetition of the home invasion aspects.