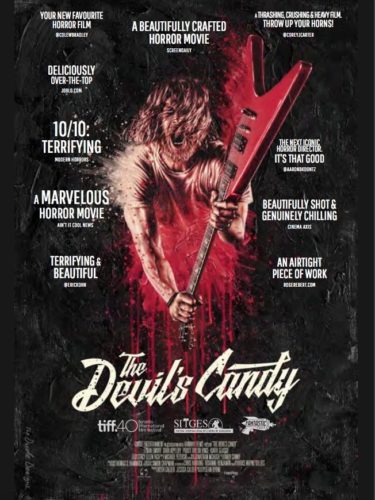 A struggling painter and metal fan moves his wife and daughter (also a metal fan) to a country house. They learn right away that a couple had died in the house prior. But eventually the father begins to hear demonic voices that influence him to paint some sinister artwork. Not only this but they have a past resident of the house who also hears voices that is back to continue his work and take his house back.

The Devilâ€™s Candy sounds like a basic possession/haunted house film. In some moments it comes off as Amityville Horror-ish. But really thatâ€™s only because of the simple formula of the moving into the house and the father hearing voices. Thatâ€™s it. What sets this movie apart from others is that it doesnâ€™t focus on paranormal or supernatural happenings. Instead it focuses on the characters. We see the affects of the voices on the father and the son of the previous dead owners. The voice of demon is enough to give you the chills. But what the movie does is really keeping you engaged in seeing how everything will play out, how these paintings the father is doing will come into play, and what deadly acts the son (who develops an obsession with the teen daughter) will go. I will say though that I feel this movie could have been at least longer. Itâ€™s an hour and eighteen minutes long including credits. I felt that there was so much more they could have provided into the script to make things more drawn out, and in all honesty, more clear. For me personally, what I loved about this movie was how stylish and visually great it was. In some cases it was CGI used right, perfectly, and was warranted. The score also goes hand-in-hand with this. It also has a subplot in which playing heavy metal music on a guitar helps keep the voices at bay, and without the music is when all hell (pun possibly intended) breaks lose. But the use of the visuals and score is so damn trippy and psychedelic that it puts Rob Zombieâ€™s The Lords of Salem to shame in how much better it was used here. We also have well-done performances by the cast.

Ethan Embry stars as the father who really has the heavy metal fan look going on. And despite his intense appearance, he really displays his love and care for his family, and he does a great job of showing the struggle between his obsession with finishing his paintings (and listening to the voices) while also wanting to protect his family. Shiri Appleby (whom Iâ€™ve never really been a fan of) really impressed me here. She doesnâ€™t overdo the mom/wife role like most actresses do and make it over-dramatic. She comes off as if sheâ€™s really playing a mom in how she behaves, her interactions with her husband and daughter, and then play the defensive mama bear when appropriate. Kiara Glasco plays their daughter and the newcomer really impresses in her role. What she impressed me the most of is how she portrays her fear. Which was excellent. But really, all three of these actors played their respective roles in the most realistic way Iâ€™ve seen in a long time in a horror film. More often than not, theyâ€™re all the same and over-dramatized. This family feels real, and itâ€™s really all thanks to the three actors. Besides the family there is Pruitt Taylor Vince as the creepy man who also hears the voices. Except this guy isnâ€™t very friendly at all. Thereâ€™s not much to say about Vince here because every role he plays is the creepy guy, and like those roles he does well with this one too.

The Devilâ€™s Candy is a visually and audibly and stylistically stunning horror movie with some freshness provided to the haunted house/possession genre. The performances are great, but I do wish the script was improved on more to make it feel more complete and have more story given on the demon and music connected to it.