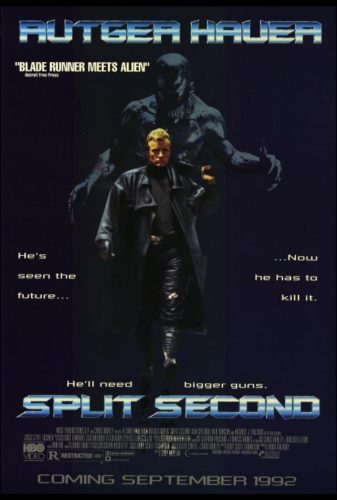 Rutger Hauer stars as Harley Stone, a hard-boiled detective with a dead partner to avenge in the â€œfutureâ€ of 2008 (Split Second was released in 1992). The murderer returns to add to its death toll, and it isnâ€™t human. Kim Cattrall makes a pre-Sex in the City appearance, and Hauer and his partner (Neil Duncan), to no oneâ€™s surprise, become friends and head into a showdown with the murderous monster.

Split Secondâ€™s set design and pacing keep the mood cool and menacing, and for two thirds of the film they create an unusual tension between an all-too-human detective and an unknowable creature on a serial murder spree. The film builds to a rousing and funny scene where Stone and his partner load up with the biggest guns they can find ( a highlight of the film), and then the film canâ€™t keep up with itself any longer. The Alien-inspired monster looks too derivative and rubbery to pay off all of the tension, and the actual battle is over too quickly.

Had Split Second delivered on the promise of its pacing and lead actorâ€™s performance, it would be a four Teddy movie instantly familiar to any genre fan. It manages three and a half Teddys as it is, and the ride is well worth the price of a ticket.