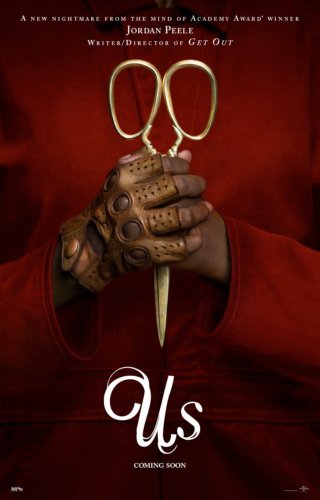 The film opens with a young girl attending a carnival with her parents, who clearly have tension with one another. The girl wonders off onto the beach where she discovers a fun house with a room of mirrors. It is there that she comes face to face with a girl who looks just like her. Years later, the girl, Addie, is grown up with a husband and two kids and are on vacation heading to her childhood vacation home. That night, four strangers appear outside their home and look exactly like them. The doppelgÃ¤ngers now seeks to torment and eventually the family who must fight back.

After the success of Get Out, Jordan Peele returns to the horror genre with this more straightforward horror film. While there is much to enjoy with his follow-up film, there was a lot of aspects that I really didnâ€™t care for that pales it compared to get out. The best part of this film is that it offers us an excellent concept. On the surface we have the opposite/evil version of our protagonists who want to take and take over their lives. That itself is a pretty chilling idea. For those who want to dig deeper, there are different themes to unpack with it that also can add a sense of creepiness and real-life applications to the story, and thatâ€™s fine, and clearly what Peele is wanting people to do. The surface story story offers a couple of intense and well-orchestrated scenes to bring tension to the film. The initial home invasion being one of them, and a cat mouse game with the daughter being the other. Like Get Out, we do root for the protagonist to come out alive and we love seeing them fight back. However, I feel like they donâ€™t do nearly as much with the horror elements as much as they could and seeing this family being tormented. A lot of this is due to some of the biggest flaws of the film. One such flaw being that the pacing is very long and drawn on out. There are times where it seems like theyâ€™re getting the ball rolling, but then it will halt with too much conversation and much of it feel repetitive. Towards the end I found myself waiting for it to finally be over, there never seemed to have a consistency in tone, which leads to my next issue with the film, and definitely the biggest.

Instead of keeping us consistently on edge, Peele has chosen to insert moments of humor that feel very out of place and unrealistic given their situation. The father and the children are making comedic comments that completely make it seem like theyâ€™re not worried about the situation they are in. At least Addie is consistently the one on edge but also in full protective mode to save her family. Thereâ€™s also a moment in a characterâ€™s death scene where their Alexa type device named Ophelia is misunderstanding the characterâ€™s demands (for example, they ask Ophelia to call the police, to which Ophelia replies, â€œOkay, now playing â€œFuck the Policeâ€). This is something you would expect from a Scary Movie entry, along with the other jokes the film has. Iâ€™m all for comedy in a horror film, but only if itâ€™s warranted, makes sense, and not over-used (I had the same issue with last yearâ€™s Halloween). Get Out perfectly used its comedy sparsely and didnâ€™t over-stay itâ€™s welcome, and it also perfectly balanced it and the horror, everything felt consistent and well-paced. Some of the comedic elements also came in the form of the sounds the doppelgÃ¤ngers make that are laughable more than creepy.

Finally, at the very end of the movie we are given a terrible twist that is so pointless, makes no sense, and just brings up more questions and plot holes than there would be if we didnâ€™t have it. We do still have some questions left by the end of the film anyway, but nothing too frustrating. This is even after we have received two huge scenes of exposition of showing why the doubles are doing what theyâ€™re doing. What we donâ€™t get (and what the most important aspect would be) are the â€œhowâ€ questions. Those are really the flaws I had with the film, which seems like a lot, but really itâ€™s just the pacing, humor, and the final twist that I only had major issues with. Other than that I did enjoy everything else it had to offer. One other thing includes an excellent performance from Lupita Nyongâ€™o as our lead playing dual roles, and itâ€™s great watching these two sides of her. Now, people are saying she deserves an Oscar for this and she deserves to make horror history with it, but I think thatâ€™s kind of a stretch. Sheâ€™s definitely great in the roles though. In addition we also have a very creepy and stunning score, and itâ€™s very well-filmed, two scenes in particular stand out involving the murder of a family that is super well-done and then the fight scene towards the end.

While I do prefer Get Out as a horror film and as a film in general over this, and despite the issues I have with this movie, I would still recommend the movie just for the concept alone, Lupitaâ€™s great performance, and the intense moments we do have are great.